More pics from the site dedicated to the Rabbonim L'beis Glasner, zt"l. Many thanks to Dr. Reb Dovid Glasner for his assistance. See Here 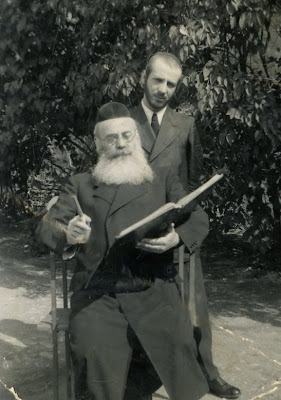 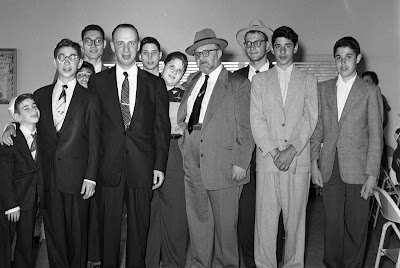 RYTG at his son's Bar Mitzvah in 1955. The man in the hat and tie is Reb Simcha Wasserman, z"l, son of Reb Elchonon, HY"D. 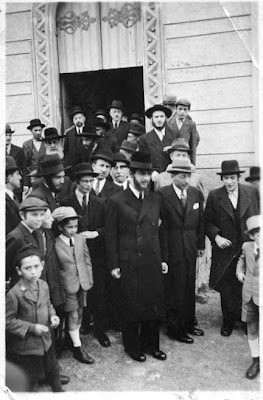 RYTG's wedding in B'Gyarmat, Hungary, 1941. The two men in the back with the Rabbinic hats are his father Reb Akiva Glasner, and his shver Reb Dovid Deitsch, HY"D, Rav of B'Gyarmat. 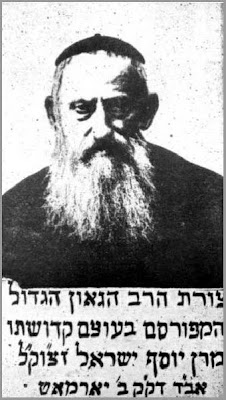 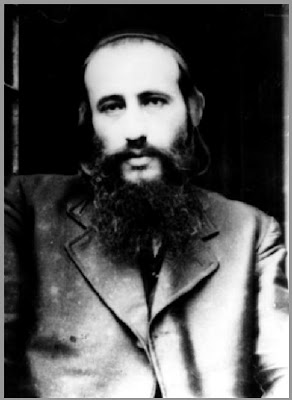 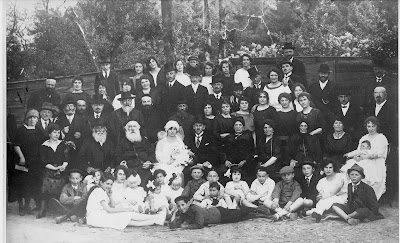 Wedding of the youngest daughter of RMSG, the DR. A very diverse and colorful family, indeed. 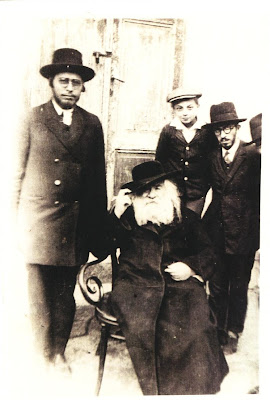 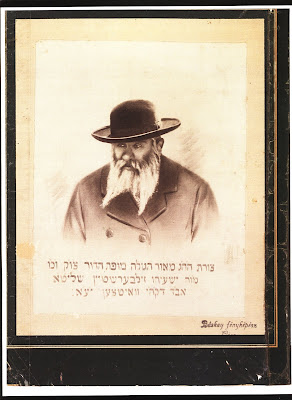 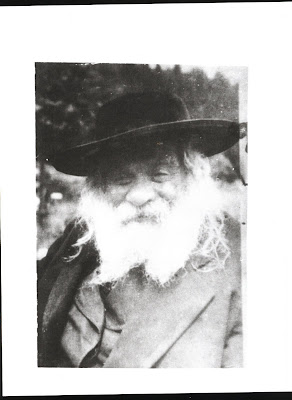 I don't think that the heiliger Chasam Sofer would sit for this family photo and be proud of the dor reviey (and chamishi veshishi) as seen in the wedding picture. Neither is RYD of Monsey. As colorful as it may be.

I can understand him not being proud (R Schlesinger from Monsey) because in today's world we're taught to be embarrassed of our ancestors, but that doesn't mean it wasn't ok back then

I don't know if RYDS is embarrassed of his past. I doubt it. He may be embarrassed of some of the cousins posing in the photo. Check it out. I wish you from the bottom of my heart that you don't have colorful einiklach like that.

It is interesting to see how the rabbis and other frume Yidden snapped their jackets and coats...

Just an aside ,the Neolog rabbi of Kluiz Rabbi Dr. Moshe Weinberger-Carmilly is alive and well in Israel. He is a serious scholar of Jewish history and bibliography and has tremendous yediios about Hungarain ajewish history. Like almost all Hungarian Neolog clergy , he was a former yeshiva bachur who then enetered the Budapest Seminary. He came from a Chasidic background and also publsihed his autobiography in English several years ago.He also authored amny other works about jewish studies. He created a Dept of Judaic Stuides in Kluiz University and they publish Jewish history works on a regular basis. For amny years he taught at Yeshiva University.

Tzig. In regards to your comments about YU and Neolog rabbis.. Do Lubavitchers believe in Teshuva or does the Ungarische background trump everything ?When a Reform rabbi from NJ Herbert Weiner wrote a wonderful book (Nine and half Mystics)about among other things Chabad and the 7th nasi, Chabad could not get enough of him even though he occupied a Reform pulpit bepoel mamash.
Do me a favor and ask a Hungarian rav if one is still alive if the Gittin etc of Neolog rabbis were teyfes.. I did ask many years ago and I received a posative reply that they were probably accepted..Perhaps the rav I spoke to did not have accurate information.
As far as I know all Neolog temples had separate seating, no organ on Sabbath, they had a shechitah,(indicating many Neolog jews ate kosher meat) rabbis were learned men. Compare this to American Reform or contemporary Conservative rabbis and temples .
For Hungarian Jews its emotional and nostalgic , for regular American Jews its more objective.(For the average Orthodox Hungarain jew before WW2 the name Status -quo was much worse than Neolog, for obvious reasons)
Even today there are a number of JTS grads who have ben kashered by YU as rabbis and believe me Lubavitch works with them and gives them kavod in a number of countries where they serve as rabbis and lets say chief rabbis.
Finally Rabbi Weinberger did not teach Shas and Poskim at YU , he taught Jewish history and Hebrew Literature , does one need semicha from lets say Tomche Tmimmim to teach that at YU ?

Its obviuos that RYDS on Monsey has a problem with the Stamerer Rebbe, knowing his background and what he did to his GGF RMSG in Cluj.

Shneur,
praising a rabbi that could be even reconstructionist is not mamaeh equal to having him teach in your mossad,your analogy is a far streach.

Schneur
Why don't you let anyone bother you with the facts.
1) Establishing a Jewish Studies program in KLausenberg University in Roumania is almost as establishing one in China. The level of both is obvious.
2) The scholarship of Weinberger-Carmilly can be seen from his book on censorship. Very shvach.
3) If no organs in Neolog Temples, how did one arrive in the famous Tabak Temple in Pest?
4) No Orth. rabbi would pasken that a Neolog get is toyfes, she the SHUT of the Hungarian Rabbanim.
So in one word: facts should also be considered a little bit once in a while.

Shneur
You still have to brush up on your hungarian history, below you will see facts that contradicts your blank statements

schneur said...
Do me a favor and ask a Hungarian rav if one is still alive if the Gittin etc of Neolog rabbis were teyfes.. I did ask many years ago and I received a posative reply that they were probably accepted..Perhaps the rav I spoke to did not have accurate information.
>>

Not perhaps. For sure.

>>>As far as I know all Neolog temples had separate seating, no organ on Sabbath,

Shneer, shneer, vos iz mit deer???
They had all that an much much worse. The Hungarian neologs in many places were far worse than the German reform. See Olomo shel Abba where he writes about the Hungarians moving Shabbos to Sunday RL.

>>they had a shechitah,(indicating many Neolog jews ate kosher meat)

How many of the hundreds of neolog communities had a shechita? Please tell us. 95% of teh neolog Jews were mechalelei shabbos and ochlei treifos - they needed a shecita?

>>>For the average Orthodox Hungarain jew before WW2 the name Status -quo was much worse than Neolog, for obvious reasons)

What obvious reasons?
Status quo actually ha da a number of 'frum' rabonim and baalei batim. I heard from a yid from satmar who said that the N shochet there had a platchik beeber hit and did not eat from his own shechita because N was ge'assered.

>>in a number of countries where they serve as rabbis and lets say chief rabbis.

Where? The only one O can think of is that leitz Schudrik in Poland. Eych mir a kehilla no'eh vechasudeh

The man in the hat and tie is Reb Simcha Wasserman, z"l, son of Reb Elchonon, HY"D

you DONT want to do an expose on his life....
those that know, know