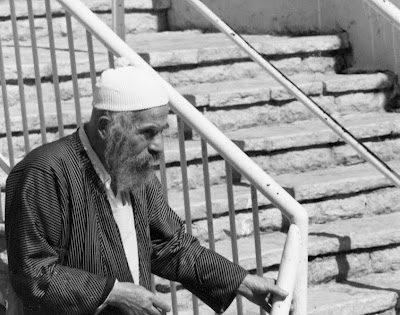 Photo by Y. Horowitz - via A Simple Jew

This is the tenth batch of my 1954 letters, published on Dec 24 2009 in the Jewish Tribune of London. (Elozor Reich, Manchester)

....Re Judy's [Sternbuch's] engagement [The soon to be Rebbetzen of R' Dovid Soloveiczik, a sister-in-law of my brother, Yidel, had just become his Kalloh]... The match had been rumoured for weeks. Eli [her brother] seemed particularly preoccupied, but understandably stonewalled my persistent queries. You ask, Leah [the Kalloh's oldest sister] for all details. Well, the Choson has two older brothers, one married called Yoshe Ber and one called Chaim; an older sister married to a big Talmid Chochom, two younger brothers named Refoel and Meir and a younger unmarried sister. I know the Choson by sight from my being many times at the Rov. [You ask about his character] To understand this one must have an insight into the whole Brisker Royal Family; a difficult set-up to describe in a few words. The Rov Shlita, who most certainly is one of, and most probably is the Godol Hador in Torah......... He is most exacting in everything and so always has complicated cheshbonos in all his actions. His family have inherited this tendency to a certain extent. They are all extremely sharp and keen witted. I imagine that [R'] Dovid will generally be the complete Moishel in the marriage, but on the other hand not interest himself in domestic matters, leaving these entirely to his wife. The Brisker shtempel will predominate. This is not as harsh as it sounds, but I am incapable of giving a condensed comprehensive picture. Generally, the Shidduch is about the most choshuv in the whole country, an exceptional yichus and also a big catch himself, as they say that he is the biggest Baal Kishron of the family.........

Says HT: I find this "meddling" in yenem's gesheften pretty juvenile and petty. Vos geit em ohn who will be the moyshel in the family? and why is a "ben torah" even thinking about these things? I also don't understand the love affair that so many seem to have with the whole Soloweyczyk clan, as if this was some kind of British Royal Family that needs to be followed in the tabloids. I'm also quite surprised at the chit-chat going on with the SIL, that definitely would not happen today... There's also very little talk about what's happening in his OWN life, I guess that's not very important when there are "celebrity" weddings to talk about... And what's up with the jabs at every other chassidic group? First it's Chabad that have "queer shitos," and now he's going after Breslov, calling them Toiter Chassidim in letters home, telling Leah back home that she too should poke fun at Tzaddikim like Reb Shmuel Shapira pictured above? Is that what the jokers back in Manchester taught him to do? No wonder he's so in love in with Brisker kinder, he has yet to recognize greatness!

Rabbosai! I just realized that I left the part with the jabs at Breslov in part 2 of this letter home, so when you thought to yourselves "what is he talking about?" you were right! The letter was just too long for one part.
Posted by Hirshel Tzig - הירשל ציג at 4:26 PM

Hirshel,
it is nature of people to poke fun at others who are out of the box,

I think the phrase Toyteh was standard in describing Breslov in those days. I wouldn't make too much of it.

Im lost where does he refer to breslover chassidim in this letter?

Tzig- the issues you raise are actually quite common amongst the English. I don't know if you are Bakant with many Englisher, but this is VERY VERY English. The analizing, the interest in the minutae of others lives, especially "royalty"- all par for the course.

You use a guys letters, probably without permission and then take a dirty swipe at him??
Wow.A new low.
Oh,
Now you can't talk to a sister in law?
And yes, genius the sister in law is the kallahs sister.So no surprise that she'd like to know a bit about her future brother in law.
Anyway, you kept using this guy , spreading the word on every blog, including the Satmar one.Now that you don't need him you revert to your ausneetser self.Feh.

these letters were published in a newspaper!

and, no! there was no censorship done on these parts.

is the guy still around?

I think the so called "love affair" with the soleivichik clan, is minuscule in comparison to the obsession we see in chabad with bais harav. never mind their obsession with Chaya Mushka...

I remember Rebbitzen Judy (as we used to call her), from my days by Rav Dovid. I can't beleive he was ever considered the smart one in the family. Taddik maybe, but brains.

A divorced Talmid of Rav Dovid remarried a Bene Brak girl. He spoke Yidish, and she spoke Ivrit.He was complaining to Rav Dovid about the difficulties in communicating. Rav Dovid replied “when I got married I only spoke Yiddish and my wife only English. It was the best thing. We couldn’t fight!!”.

Gimpele
I thought that the misnagdim accused the Chasidim of idol worship, taking a yenuka for a rebbe, etc,,and now we have a guy like AJ carrying the torch of the brisker dynasty, that repeats like a parrot the shiurim of the father, (ask him a sheilah in hichos muktzah or hilchos bosur becholev)eventough he has a uncle a talmid chochem muvak and yerie shomaim,with a few briker meshugazen but a choshever personailty, (its like Reb Elozer moshe wrote in the teshuvas we are becoming like the chasidim)

twiseltown,
sorry you were unable to understand the Rosh Yeshiva's shiur or even see his genius, but that says a lot about your level of intelligence, not his.
Anon,
Rav AY Soloveitchik is a huge gaon compared to what we got in Lakewood today.

Just shows how far Lubavitch is from Chabad. I was expecting to see something here in honour of כד טבת. Come on, lets have something good.

twiseltown,
sorry you were unable to understand the Rosh Yeshiva's shiur or even see his genius, but that says a lot about your level of intelligence, not his.

Anonymous of Friday, January 08, 2010 2:52:00 PM
Firstly, it is Twistelton-Twistelton. If I say so myself, I was considered quite a good Bachur while I was in R’ Dovid. Just I didn’t drink the Koolaid. I didn’t notice any of the hardcore talmidim such as Moskowitz, Nojowitz, Ravitz, Schlesinger etc swear about R’ Dovids genius. I guess it’s true, we ARE becoming more like the Chassidim!!

Sorry Tzig - ur obviously misinformed rgsrding Breslov !!!
They have always been known by the nickname "toyte chassidim" (i refer you to the exact words of the Nesivos Shalom rgearding the Slonimer chassidim after their rebbe was killed by the Nazis yms"h)

anon fri. 1:56,
regarding your rav ays point: there is actually a yid in yerushalaim named R' Tzvi Kaplan, who has a yeshiva and all he does is parrot Rav AYS's shiur.

Hocker,
we can only see Reb AJs Kishronois in the good soundbites of chumash Rashi, (that is not recorded for 2 reasons,1) its controversial on too many people and the world will see his true colors 2) the Tate and Zaide didn"t use a microphone and a taperecorder so he is not using them either, its the same stupidity as the New Skwerer Rebbe)but besides that their is noting original in this rosh yeshiva that by the way has 90 % talmidim foreigner yankees and british.

")but besides that their is noting original in this rosh yeshiva that by the way has 90 % talmidim foreigner yankees and british."

So what?
Genius you are not