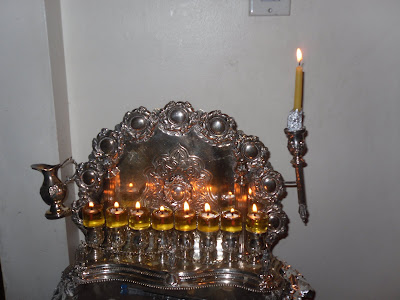 Ocho Kandelikas on a Wednesday night...

I sit here on Zos Chanukah night at 10:45pm having just finished lighting the Menorah and waited the appropriate half an hour alongside it. I should feel like some big Rebbe who lights like 10 o'clock, but I don't. I had a long day at work. By the time I came home most of the kids were asleep, and those that weren't weren't very keen on waiting the half an hour with me. They went to bed. At least one of my sons prepared the menorah so nicely - brand new glasses and a nice shamesh too. So I turn to my other family to share my thoughts. At work a young man was very excited about Zos Chanukah; he told me very warmly that I should פועל אויס אלעס גוטס. "Gezint, Parnooseh, Naches, Shoolim Bayis." I smiled and responded in kind. I'm sure what you can "poel" when you're staring at a computer screen and dealing with 'nechertes' in the office on such an auspicious day - but he's very excited about it, and far it be from me to rain on his parade. Excuse me saying so, but here again the working man is discriminated against. He cannot experience what a yoshev ohel would experience were he to apply himself and try and receive that wish Zos Chanukah offers. We're talking about those that kuch zich in zos chanukah - not all do, and if you don't then I guess you wouldn't be missing anything either way. 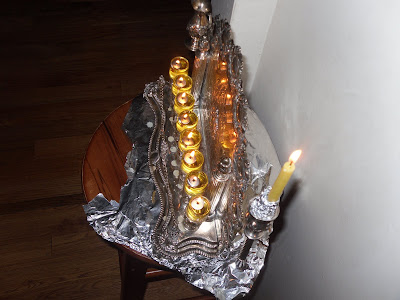 So I sit by myself in a mostly dark house in Rockland County. It's warm and the candles are nearby. Maybe too warm. I wonder what my O&R bill will be like next month. I cannot hear the story that the lichtalach tell; too much grobkeit over the years keep your ears from hearing di eydele zachun. The idea of a zos chanukah rings true, whether the Bnei Yissoschor is your guiding light or not. The point that 3/4 of a year is still a year ---- that we could retroactively have a good YEAR despite only 9 months ahead of us - and despite having three mediocre (or worse) months - is an idea that we all should live by. Sometimes it's those that profess to live by a certain teaching that need the most encouragement when it comes to that point; those that profess that it's never too late often give up and throw in the towel, saying that it's too late to change. It's for that reason that the point is hammered home so often - not because we so excel in that middoh, but efsher gor farkert. So whether or not you work or learn Zos Chanukah can be more than another last chance, it can be a life's lesson that keeps on teaching. So whether you make it to some Zos Chanuah somewhere late tomorrow night shouldn't be what matters. What matters should be whether or not you carpe the diem or not. I hope that made sense to some of you. 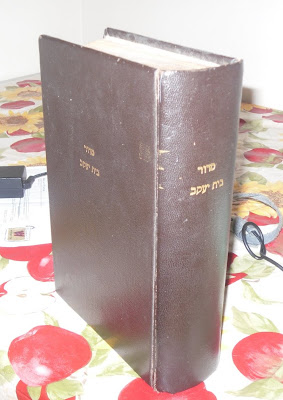 Chanukah is one of those times ven ich nem afier dem zeyden's Reb Yankev Emden siddur and gently caress its pages. The siddur was a present from di Bobbe olehu hashoolem over 50 years ago, back when they lived in East New York, (Brooklyn) Vermont Street to be exact, and a very warm Hungarian inscription from her lives in the siddur for eternity. Der zeyde inscribed in it all his yohrtzeiten, his parents, first wife, first 4 kids, siblings, and later on his second wife - di bubbe - too. The European Yohrtzeiten are in bunches ----- families, not individuals.... It keeps you wondering how he managed to rebuild and lead a life of relative joy and untold Torah learning despite that. Ahhhh, lulei soyroscho sha'ashu'oy, oz ovadeti b'unyee. We see it b'chush, even amongst Hungarian baaleibatim, not just in di Litteh. I was zoche to inherit the siddur - with my mother being an only child - and feel especially privileged to have it in my posession. I took the liberty to add the zeyde's name and Yom HaPetiroh underneath his family's as a gesture of continuity, showing the Jewish nation's indellible spirit and unwavering commitment to Torah and Mitzvos. The siddur's condition tells me that Chanukah is an especially auspicious time to be used, as I'll illustrate fortwith. 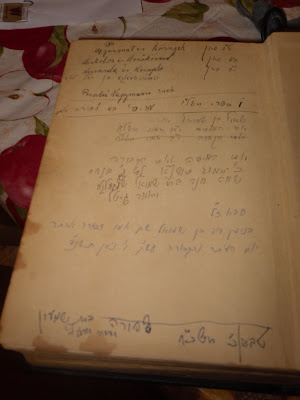 Front page of Siddur with Hungarian inscriptions. I trust you guys enough not to snoop around too much... 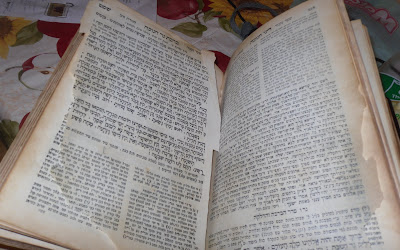 Take a look at these pages. They whither away, while the rest of the siddur is as good as new. Not Pesach, not Shabbos, not Rosh Chodesh, nothing else looks half as bad as Chanukah. I wonder why that is, but then again, maybe I shouldn't. Chanukah was always special. Der Zeyde would sit forever by the Chanukah licht, often times all by himself and say the pizmonim and watch the licht. No weird and wild gesticulations, no weird gestures, just pure and simple attachment to the siddur and to he to whom he said the mizmorim to. Devotion to Hashem and his Torah, and a very special attachment to the siddur despite being quite at home in most Chelkei HaShas and Shulchan Aruch. Maybe because these Yidden were the נותר קנקנים that נעשה נס לשושנים; the shearis hapleitoh that the eybershter made miracles for and helped them rebuild, maybe that's why Chanukah was so special in their hearts, and by extension in their siddurim as well. Maybe they were thinking about Chanukas past and those that were taken from them. Those of us that were lucky enough to spend years with such special zeides and bubbes have much to be thankful for. They have fountains from which to draw the waters of life - lessons on how to live life despite such hardships, and how to live as believing Jews, not just of the lip-service kind. What better time than the last moments of Chanukah to give Hallel and Hodo'oh for that, whether for past or present. And if even luckier and have a zeide and/or bubbe still with us kiss his/her hand and tell her how much you love him/her and appreciate him. You might even get some extra Chanukah gelt out of it.

In the times that you show an ability for introspection I know that not all is lost since you became a card carrying Lubavitcher.
Introspection is something that does not exist there.

"not that you offer דבש, just saying.."
Well, actually what are you saying??

Look, introspection is not something that exists in today's Lubavitch.
They "know" everything, there is no "soul searching" the Rebbe has mapped everything for them.Lechatchila ariber etc....
Sometimes you forget this and write a good introspective post.
Dus iz ess.
Like it, don't like it...

This year 5771 is an ibber yohr so there are IYH still 10 months left.

by alot of Hungarian jews the Emden Sidur was not only the Zogerel for Srifes chometz and Chanuka it was their Shulchan Orech. I remeber hearing from the elders that in the villages they only kept whats in the sidur not more..., in Russia by chasidim they had the Likutie Tzvi which I dont see anymore .
Btw, most of the stuff in that sidur is not from the emden it was added by a chasidic shochet,Reb Moshe Bich reprinted the original sidur, its a different world.

Nice post. I feel your pain as I stare at my screen at work today.

I know you have posted about this before, but how do you deal with the lack of pizmonim piyyutim etc. in Minhag Chabad. Do you sing Moaz Tzur?
Vus is a fratig tzinachts un koh echsof?

First half of the post is lost on me, zos chanukah is a kriyas hatorah. Second half - that's what keeps people coming back.

yes, ZC is Krias haTorah for most people, but for some people it has meaning. I'm not saying that to put you down, just to make a point.

I would imagine that idea has seeped into the Yeshivishe world as well, at least a משהו

Hirshel
I don"t think that chabad shares with the Pielisher velt the Git Kvitel blessing of Zos Chanuka, The LR has a likut on ZC but not pertaining the end of the Yomim Noraim

I know that. I'm just saying

btw, is this a machlokes in metzius?

what is earliest mekor for zos chanuka?

clean the walls, wash the floors, change the silver foil and wipe all that gunk off the menorah. And don't get me started on that table cloth! It's December, bro, not July.

Off topic'
What's your take on the letter against renting apartments to "areilim" in E.Yisroel?

I'm flattered you want to hear my opinion, but I could care less about that now.
sorry

I sit and wonder
think and ponder
stare into the yonder

Sheesh. I finally read the whole darn thing. Absolutely beutiful. it's a good thing yur zeydeh wasn't from the lita; u never would have been able to write that....

I suppose he thought you were worth it!