Spinka, for thee I cry 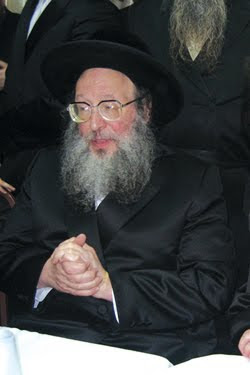 Today was D-day on at Spinka HQ on 56th Street. The judge did what many of us hoped would never happen. There will be no house arrest. Arrest, yes, just not in the house. From what I hear Texas may have its first Chassidishe Rebbe as a resident...We'll try and keep you posted. UPDATE: I hear now that the SR first traveled to Massachusetts for medical tests, and will most likely then transfer to Otisville Correctional Facility in New York to spend the remainder of his sentence there.

I was at a meeting of former talmidim last Spring in Monsey. I must say that it's "ah shod" that I couldn't have had that connection with the Spinker Rebbe back when I was a talmid there. The setting was very "loose." After a speech from the Spinker Rebbe and a short overview of the situation there was Maariv, with the customary Spinka sefiras haOmer. After services each yungerman sat down and spoke to the SR, reminiscing about his time in the cheder/yeshiva, and bringing him up to date as to what's going with him at this point in time. It had been a long time since we spoke, a very long time, for whatever reason, and we spoke for a long time. It was easy going and inspiring at the same time. The SR told me then that he too learned in Tomchei Tmimim, ("Ich bin oich a Tumim")and that among other things the Gabbai Reb Yochonon Gordon passed away in his father's shul at 440 crown Street. I must say for a Tomim he sure had to brush up on his Lubavitch knowledge, but that's neither here nor there. I walked away with a new appreciation for the SR as well as for my years there, in Spinka Cheder and Mesivta. (If I already wrote about that evening here I apologize.) Obviously it's not proper for a young bucher'l to be buddy with the Rov/Rebbe/Rosh Yeshivah, but still, I can't help but think that things could've been better there, that the atmosphere didn't have so "ohngeshtrenked" all the time, that the Yeshivah could've been a lot more successful with a better Modus Operandi. Maybe I speak only for myself, I'll grant you that, but don't we all see things our way?

I realize that today is different than 10-15 years ago, when you could get away with murder in NYS, maybe sit for a few months, and certain people were "above the law." א געוויסע רבי פון ספרינג וואלי קומט אין באטראכט. But one can't keep from wondering what many of you keep on wondering when it comes to SMR: where was Misters so-and-so when we needed them? Where are all the years of connections and elbow-rubbing when you need them? Why didn't "der-un-der" speak to _____________? and why didn't _______________ use his contacts to at least stop this embarassment? I'm not pointing fingers at anybody, because I doubt there was much to do. Times are different and not everything is for sale like it was in the pre-Internet age. But I do cry for the fact that this had to happen, and that years of hard work may come to an abrupt halt, despite 2 generations of educating thousands of Yiddishe Kinder. זאל דער אייבערשטער געבן אז דער ספינקער רבי שליט"א זאל אפקומען מיט א פאר טעג און אינגיכן ארויסגיין מן המיצר אל המרחב בתוך שאר בני ישראל.

Related Reading: (Order may be mixed up. Check the dates for the proper order.)

2) More Spinka Talk on the Blog

The Spinka Rebbe got in Prison a Private Room with a New Microwave & Fridge for his Kosher Meals & they Gave a Special Permission that he can Wear His Regular Rebbisha Clothing in the Chapel Room, Doctor will Come Today to make CheckUp for Trasnfer to Otisville Camp.

He should do the honorable deed and abdicate.

how long will he sit ?

Reply to Motti
Dont be such a "holier than thou"
If you cheat on your taxes, the IRS could haul you off to prison as well.
Better you should feel rochmonus for this man and what he is going thtough now.

how will they accommodate his mikva requirements?

has it occurred to you that some Jews don't cheat on their taxes?

Ma Rabbi illustrates the problem in our frum society.

the difference between the spinker and the masmeedim in EY is that he took he took for his mosdos and they took for themselves....but do me a favor..don't compare yourself to yosef ha tzadik...

Rechov Slonim
"and they took for themselves.."
every family in Yerushaliem is a Mossad

Ma Rabbi - from your response I think you have no clue the massive negative impact of this hillul hashem. And the melave malka and Yosef hatzaddik comparison only made it worse (if that is even possible).

And no, I don't cheat on my taxes. But that is irrelevant. What the Spinka was convicted of wasn't a mere 'cheating on taxes'. It was a carefully orchestrated scheme, together with others, to commit large scale financial fraud to support his mosdos. And that fraud only worked because it fed the greed of the contributors, who then able to commit their own frauds. So please, let's not make this out to be a case of 'oops, I made a mistake on my tax form...'

I do have rachmanus on him. In private. For the fall he has experienced. L'bira amikta m'igra ramah. But in public we have a huge hillul hashem to deal with; and there one isn't allowed rachmanus.

We have rachmanus for the Shechinah. Every day we keep her in galus with our behaviors. And this hillul hashem only made that much worse. Oy lanu.

Chilul Hashem Mongers
This week we had a big chilul hashem of a yekkishe boy of Wasington Heights by the name Hirshel Kissinger?
In the nixon tapes you hear our yekkishe boy saying we dont give a damm if Jews will be gassed,only 2 decades have passed since the Shoa, and a Jewish Pirchie Boy talks casual about gassing Jews .
To all you MO, Yekkes, Harry Merileses I am saying,Let us Charidie/Chasidic Jews handle our Dina De Malchussa problems on our own, Klal Yisroel will be better off Begashmius Uberochnias then if we follow your false hollow frumkiet. I understand that people will say why condemm them all? but Chazal said in Mesechtes Suka by Baas Bilgeh.... Plus ask the Galicianer Yidden that had to be in Austria? Germay before WW2? How they were treated by the locals as parasites, the door knobs were washed by the maid after the Jew left the Yekkishe house.

So, "Ma Rabbi" brings the "everybody does it" defense. Just remember that Gehinnom is a very big place and has plenty of room for all the neshamos that say it.

I remember Abish ah & his younger brother "Tuli" from their daddy's shul on Crown St. Reb Yechiel, the shammash, drove us all to the Lubavitcher Yeshiva on Bedford & Dean. I also recall that the late Rebbe had some involvement with the Garden Nursing Home which stood at Kingston Av and St Johns Pl. The apple don't fall.........

anon 11 42
I'm not a "chilul hashem monger" however, i do believe that if someone who's supposed to be a rebbe gets convicted for money laundering, that creates a chilul hashem, sai bah goyim, sai bah yiddin.
believe it or not, i think that's true no matter what a mo bochur says,n and no matter what the yekkishe yiddun did, no matter what kind of toilet paper they use in hong kong

Tzig, thank you for the links !
By the way, did you ever continue with part-v ?