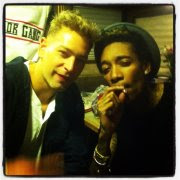 The descent of Matisyahu is a direct lesson for people in power, especially Shluchim who need programs to promote to their communities. The lesson: Never sacrifice an individual for community inspiration. Maybe that's a slight paraphrase of, "When working for Klal Yisroel, don't forget Reb Yisroel" - or in this case, Reb Matisyahu. Shluchim gave Matisyahu his platform. Not just his first platform, but year after year of platforms, which translated into press, and then Sony noticed him. Shluchim on campus noticed his attraction to their college-age crowds and started the trend, then communities picked up on it. Shluchim may believe that they have no responsibility to think through who they bring to entertain or lecture for their community beyond checking that the person is kosher. Shluchim may believe that they have no reason to consider the impact on the performer or lecturer themselves. They are wrong, wrong, wrong.

The first question every Shliach should have asked is the same question they would have asked about their own Baalei Teshuvah and community members - is this right for the Baal Teshuvah, for the person, not is this right for my community. Did no Shliach notice that he was back to doing drugs almost immediately? Did no Shliach realize they were propping him up as an example for their communities, and Lubavitch in general, when he had barely acquired anything of his own to give? The message became, don't follow Torah, Mitzvos and Chassidus, follow the celebrity and Sony contract. Shluchim vet visitors to their Chabad houses from other towns carefully. As they should, there are crazies out there. Witness the firebombing of the California Chabad house. Phone calls, references, some chatting to feel the visitor out, whatever it is, Shluchim check. The same vetting should apply to entertainment, not only for its value to the community, but for the value to the person performing. Matisyahu isn't the first person to inappropriately join the Chabad house circuit, only the most prominent. The problem takes other shapes as well, such as the direction given staff - bochurim or bochurettes - when they come to a community to run camps or programs. I don't know how far down the responsibility goes - rumor had it back then when Matisyahu started his career that his mashpia encouraged him in his path of celebrity, which is outrageous - but we are each responsible for every yid, not only the ones we want to take charge of.
Posted by Hirshel Tzig - הירשל ציג at 2:18 PM

Don't blame the shluchim for this , it comes from on high....

Rav Troper was a shaliach of all the right wing gedolie yisroel, and he ended up a mollester, this stupid jumping to conclusion on this site is so childish.
Chabad used MBD and Fried and they boruch hashem ended very nice...
Did he not leave Chabad to Karlin... why is it always Chabads fault?
if it would be the opposite, that he would come to Chabad from Karlin, who would be at fault then...?

I happen to know for a fact that the rosh yeshiva of Hadar Hatorah (were mattisyahu attended) rav yakkov goldberg advised mattisyahu not to go into music.

Very true. And another tip to Shluchim and organizers of public events: please go in person and view the show/lecture/performance, to the very last detail. Make sure it is worthy of having the Rebbe in the audience, and you won't go wrong.

Why is everyone assuming Matisyahu is totally OTD? Not all Jews wear kippahs or have beards. Its not the end of the world. Some folks thing even the Rebbe zy"a didn't wear a kippah in Berlin. R DZ Hoffman discusses this in a famous teshuvah. Certainly the Ramchal, Ramah MiFano weren't bad Jews for not having a beard. Theres lots of ways to serve Hashem and they don't all come from the area between Ujhel and Munkacs. Thousands of Italian, Sefardic, German, French Jews weren't any less Jewish from lacking the accouterments of Crown Heights, BP or Lakewood circa 2012. Maybe you should focus on Matis's peniymiyus-- is he nice to his wife? is he shofech sicho lefnei mmh"m keeved lifnei rabbo? and not on external trappings of your materialistic and false religion. Better yet, shave your own beard, get rid of your roadkill hat and technicolor silk smoking jacket and try to actually help another human being, give chizuk to someone whos going through a bad time, or keep someone from beating their wife.

Guravitzer just one question, did u ever have a 10 minute 1 on 1 conversation with matisyahu? highly doubt it, bec if u did, u wouldn't have written this. your nekuda is correct, but it doesn't connect to him. sorry to say this, the guy is totally off the wall and using his journey as a statement is nuts.

Not to say 'I told you so' but I was wary of the way Matisyahu was embraced by the Chabad community. His music may have nice words but was not in any way chassidish or even Jewish. It bothered me that just because he attended Chabad yeshivas he was automatically kosher.
I agree 100% with Hirshel's post. As a community we have to be more discerning about what music we let or kids listen to.
I am certain that if he wasn't connected to Chabad back then he would never have been allowed to play to Chabad audiences.

That is not to say that I do not support Matisyahu as a yid who is on a journey to discover where he stands in yiddishkeit. Hopefully he will have menuchas hanefesh and will find where he fits in.

Naftoli,
Back where I come from it is the Daled Amos of Halacha that guide us, not some undefined feeling.

I do not know what constitutes Jewish Music, but you seem to. How do you know that? Which Siman in Shulchan Aruch discusses it? I know about Shirei Agovim, but that's about it.

What is so Kosher about the Waltzes that are used by Polish Chassidim? Were the Nochrim who danced these more moral than today? Why is this music so acceptable?

What is so Kosher about SoleKokoshMar? Just because a peasant sang it and a Rebbe liked it, does it mean it can become Jewishly acceptable?

What is so holy about Napolean's March that causes it to be sung on Yom Kippur?

It's just not acceptable to throw out these lines without backing your views up.

What do you think Kadesh Atzmecho B'Mar Shemuttar Loch might mean? What is Muttar Loch? I don't see any reason why any style of music (apart from Avoda Zoroh based and Love Songs according to the Rambam) can't be used for good and re-interpreted.

pitputim, I usually love your comments, but this last one is not up to par: I expect this line of reasoning from a 15 year old girl with a chip on her shoulder.

To answer your rhetorical question: Just because a peasant sang it and a Rebbe liked it, does it mean it can become Jewishly acceptable?

Yes. Exactly. Music has many sources. So yes, it takes some form of acceptance by discerning Jews to make it "raui" for Klal Yisrael. Granted this is not a formal legislative process. But it's a given. I can't honestly believe that you see no difference between a waltz and rap.

That said,I'm not speaking about Matisyahu here. I was just addressing your general point about music.

pitputim:
"That is not to say that I do not support Matisyahu as a yid who is on a journey to discover where he stands in yiddishkeit."

"What is so Kosher about SoleKokoshMar? Just because a peasant sang it and a Rebbe liked it,"

"I agree 100% with Hirshel's post. As a community we have to be more discerning about what music we let or kids listen to. "
I diagree totaly with this new craze by chasidim and misnagdim to freeze the style of music.
Music is not Jewish, it was influenced by the region and era where the Jew lived. 90% of the gentile music was for romance and Zimah, for all the years, and so it is today.
Not all songs were made by the old skulener....

Kol Hakovod To Reb Herschal. You have the courage to criticize your own when warranted.

So he sang a little for us, now he gets to learn some more and grow some. He is not a G-d, put there for us to worship. He isn't required to be perfect. He is on the journey. Like the rest of us. And he gave us a little entertainment. He sang us down the road a-piece. He gave us a little happiness. Now he has to get back to his studies like the rest of us. It is a long long road, maybe he can sing some more.

Yehupitz and others, you missed my point.

a) I was NOT saying songs from others can't become 'Jewish" or inspirational.

b) I was NOT equating Matisyahu with the Kaliver

My point was that this notion of "NON KOSHER" music is without foundation. It's not about the music, it's about the person who sings it, their interpretation, their intentions etc

Accordingly, you don't dismiss Matisyahu because of RAP per se! I don't like Rap myself. I don't like it because it doesn't touch my soul. I don't feel it's music. That's a personal feeling. That being said, someone who IS kosher etc and uses Rap, is not doing anything wrong surely!