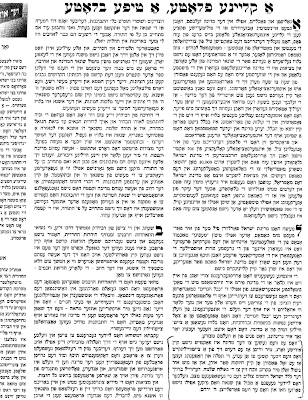 Maybe it's all a game. They don't really believe what they're writing no matter how they revered the Satmar Rov z"l. Maybe they write this kind of stuff only because they're never afraid that it'll hurt them. People that need to interact with other people from other kreizen don't broadcast such stuff for the world to see. (That would tell you some of the more radical unemployed Meshichisten do what they do.) They're financially independent and aren't afraid of repercussions. Boycotts rarely work. People want their shopping experience to be as hassle free as possible, and don't want to worry about what they can and can't buy. Most people don't read the newspaper and would never see it if not for Circus Tent. Not that I'm condoning boycotts here, but it was mentioned on the blog this week. They have a really hard time expressing love for other Jews, despite all the Tzedokoh and Bikur Cholim and Hachnosas Kalloh, which amazes me. And they're so proud of being "mekayem" משנאיך ה' אשנא, mamesh tzaddikim gemurim. What a guide in life that is... Whatever.

What gets me in this editorial is this phoney baloney line where they daven that the medinah collapse without any Yid being hurt, c"v. Not that I doubt that they don't wanna see Jewish casualties, c"v; what I do doubt is their sincerity. S'nisht kein davenen, s'gornisht. They're not davening to hashem to destroy anything, and if they do then they don't believe that G-d will actually destroy it. They too have too much invested in the Holy Land and they won't have Abbas or Hamas tell them what to do. Individual shnorrers like Moshe Hirsh's kids have nothing to lose and eberything to gain, but not an empire like Satmar. It's stam gehakt. It sounds good but it's like pi---n in di mikvah. s'kust nisht kan gelt and it takes no effort. I just wish they'd stop teaching this stuff to their kids. Too many thousands convince themselves they're good Jews and zealots by "believing" this.

what kind of jews are they when they write "what will happen to the medinah is not a jewish worry"
are they nuts? did they lose their mind completely???

you are really off this time. they want the medinah gone badly
they are real!
not afraid of expressing their shitah. i am not saying you have to agree you can hold like the
בין אור לחשך

the satmer rebbe said that the medina stops meshiachs arrival
you know good deeds helps ,bad deeds prevents, and he said that having a government with sovereignty is holds back the geula shleima by meshiah tzikeini,
so part of the the tefila that meshiach should come, we are also mispallel the all obstacles should be eliminated without jews being hurt, say amen

I am a satmar talmud, live in BP. never go to ANY of the satamr events these days. maybe because the lack of interest. the fighting. i just dont participate. but since i have satmar blood running in me. and it was a holiday. i took my kids and we went to protest monday in manhattan.
I would estimate about 5-6,000 people maybe I'm wrong but that's my estimate.

not to read in Der Yid this week that they didnt have 1000 people got me so mad that i told my wife NEVER to buy der yid again.
it's a shame to write page after page against something so importent JUST because not your Rebbe was Berosh.
shame on them

There were hundreds of people waiting at the station for the bus to pick them up from work the bus was delayed,
delayed,
delayed,
some people went off the sidewalk to see a sign of the bus arrival, it started to get late some were mumbling that the bus wont arrive , some said in this time i could have arrived by walking who needs the bus, and some people started to walk saying "we don't want to WAIT",
some people took a taxi,
the people with hope stayed waiting,
waiting,
waiting,for I know the driver HE wont let me down

Oh goody! Moshiach can't come until Israel disapears! I'm perfect,it's all Israel's fault! In the meanwhile, let's enjoy America and all it has to offer.

I'm not sure who does more damage to Klal Yisroel, the Satmarer Chossid demonstrating against Israel or the Chabad Shluchim who teach the Kulos that they use for Baalei Tshuvah to potential Geirim. Or even worse the self-appointed Rav Hamgayer for Chabad, who includes a free Sidur Kidushin in his price.

Which kulos are you talking about?

Ayo, my pen and paper cause a chain reaction
To get your brain relaxing, a zany acting maniac in action
A brainiac in fact son, you mainly lack attraction
You look insanely whack when just a fraction of my tracks run
My rhyming skills got you climbing hills
I travel through your mind into your spine like siren drills

Anon
what exactly is your problem with the Mesader Kidushin? you are confused with Monroe Sidur Kidushin fiasco, where eventually every 3rd boy or girl will be considered a Mamzer depends to the group you are affiliated.

Hirshel
All the anti Zionist diatribes of the 2 sides pales the language they are using to smear and bury their own brethren, Also did you hear that one side almost ignored the others protest in their papers, after nights of fights on the Willi streets to tear off posters of the protesters, How can a person with a half a brain still believe that the protest has to do with a ashkelon cemetery? or the editorials have some credence, it is all show. I hope now they will understand why all gedolim in the USA didn't participate in thier protest, they were dragging rabonim thru Chanifa,Teror, and from time to time they got some personality to attend,but basicaly the whole american Charadie world wasn't suckered in.They always felt the same way as the zali look at the aronim and vice versa. if you will check thru the sefer Veyoel Moshe you will realize he never credits the Munkacher rov the big Kanoi that fought the Zionists Agudists etc.. its for the same reason as the 2 holy Brothers don't mention the protests, he was his nemesis in many turf wars in Unterland.

from their Der Yid Writing they feel very proud of the great Hanoga of The Sakmer rov, the wisest rebbe since creation, plus the holiest(I still don't know what makes him holier (Rabinie Hakodesh constantly)then the Bais Yisroel,Imrie chaim, Chebiner Rov or his FMR nephew the Klausenburger, is their a certain Kedusha barometer that certified it for them?. What did he achieve with all his protest thru the years, did he hasten the Demise of Israel thru his protest? Did he become the official spokesman of the world Jewry and the Zinists? Was their a goal to be gained? Or its just the Mitzvas Tochocha. then why not protest every day, where does it say that only the Wisest and the holiest Rebbe on earth can decide on a simple mitzva? Is it any different then Tefilin or Tzitith, that obliges every Jew even the non wise and the non holy?
It is important to note that the other Rebbes can show alot on their plate, how much Torah and Kedusha they achieved in the holy land.The stream of kedusha is going Midan ad Beer Sheva,

Why does it seem to me that Chasidim have a higher rate of Down Syndrome kids? Most of us come from the same gene pool from the last thousand years, so what is takeh pshat?

Tzig,
PLEASE check out these pics from Satmar news.wordpress.com
I want to brech, it's becoming impossible with these chevreh, they remind me of arailem.http://satmarnews.wordpress.com/2010/06/06/pictures-aronim-digging-at-the-rebetzin-shul-in-kj-arrest-4-1-hospitalized/kj33/

55 years after the Holocaust we are not taking the lessons of this disaster very seriously.
Lets forget about any Messianic meaning just a makom miklot for the state of Israel, but from the years 1933-1945 hardly any country was friendly to the Jews and 6 million Jews were killed. Could it happen again ? Why not ? is therea havtocha from the Satmarer rebbe that it won't happen ?
Why is it for shidduchim , business and all sorts of things farlost men zich not af G-t ober af pikuach Nefesh is do a naye din az men darf zich farlosen af nissim !!! It did not work in 1933-1945. as a great Christian thinker remarked "that those who do not learn from histoy are doomed to repeat it" The Charedi world has not learnt from history, you think your homes in BP and yeshivas are nitzchadik , so did the Jews in Munkatch, Lublin etc. Why should the medinah be battel, maybe Kj should be battel without the loss of their money or lives , maybe its time for New Skver to dissolve with chalila vechas no jewish suffering? Why Israel. In the uncensored Rambam its mashma that if the Ruler of Israel fails in his wars then he is keshear malchei bais david, a strong rayaa that rambam believed that there could be a Jewish state prior to the messiah !!

There's a certain mystique when I speak,
that you notice that it's sorta unique,
cause you know it's me, my poetry's deep,
and I'm still matic the way I flow to this beat,
you can't sit still, it's like tryin to smoke crack
and go to sleep, I'm strapped,
just knowing any minute I could snap,
I'm the equivalent of what would happen if Bush rapped

A smile on my face, with a toothy grin
Speak of a far-off place, the Rebbe in Berlin
Chabad tries to save face, Snaggs call it a sin

Is he addressing dead issues? (No pun intended)

If you would feel an achrayus for the klal, you would write a new post already!

from their Gedolim who were raised on Hershey bars Joe Dimaggio and who had good heads so they soaked up some Torah.