One of the advantages - for lack of a better term - in America, or anywhere outside Israel for that matter, is that most people don't try and convince themselves that they're someone special. DeHaynu, most people stick to the norms of the group that they belong to and don't think that they're the Alter of Slabodkeh or the Vilner Goyen. Even the Rebbishe types basically tow the line and do others what do, for better or for worse. They'll all make the same weddings and the same Shvuos flower arrangements in their shul, give or take a potted plant. Yes, you'll have a few spodiks with veise zokken, but even that is only because they feel inferior because they've been in America too long. But we can accept something as benign as that. In the Holy Land things are different, we can debate as to why, but that's the case. Between ChazonIsh'nikkes, Briskers, Americans that make Aliyah and all the rest, it's a free-for all. Anything goes. That's as far as groups go, and we just said that we don't mind groups as much, but then there are those who woke up one morning and decided that they're, like, super-special. That somehow they're gonna live in the Old City, wear tefillin all day like the Tanoyim and Amoroyim, and make Yiddishkeit worthwhile to G-d again. I'm not sure about this, but being that this is happening in the Old City I would say that this has something to do with the Zilberman crowd. I would also bet that some of these full-day tefillin wearing guys have a problem with Chabad putting tefillin on Jews because of Guf Noki... Then again, maybe it's a Taanis thing and they don't do it every day. In any case, it's cool. 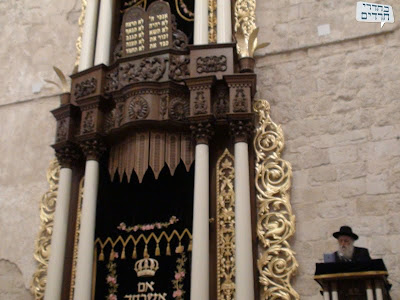 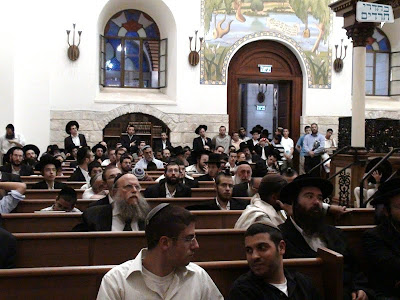 Somewhat of a mixed crowd. Let's see how long the Dati LeUmi crowd hangs around. I say not very long. They're gonna be made to feel very uncomfortable and leave. 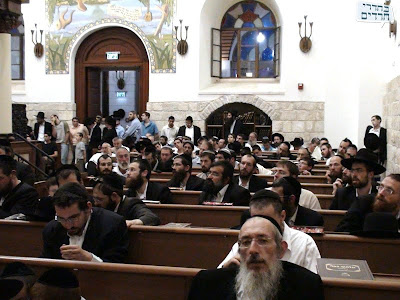 The shul sure is a beauty! 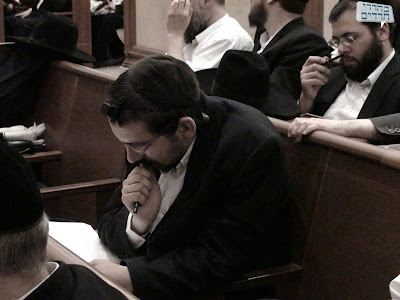 Inconspicuous yet at the same time very much not.
Posted by Hirshel Tzig - הירשל ציג at 2:42 PM

I keep clippings of articles from frum papers and transcripts of various speeches. When I have trouble feeling the churban on tisha b'av I take them out and read them. It gives a whole new meaning to "oy meh haya lanu?!" Your post made the cut.