I still don't believe it... 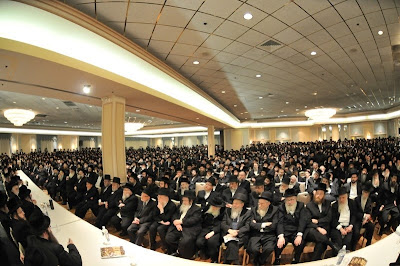 I was there at 9pm, when there were about 20-30 people there. After all, it was called for 9 בדיוק גמור, and I didn't want to miss a second of it. I saw all the thousands of chairs that were set up and I thought it was very wishful thinking. It took some time till they started, about 9:20 or so, and they needed to ask people to move up towards the front. We figured they wanted to make it look better. But you see the pictures, they filled up the hall and then some. The MC, the speeches, the applause, everything was textbook good, nisht stam. You stand there and you watch it and you tip your hat to the organizers. How they managed to get such an oylem, so many Rabbonim and Roshei Yeshivah - it's beyond description! And best of all they "made" you make a donation; with at least 30 people collecting in 3 different locations there was "no way out," you had to give. You may think it a bit "pushy" and uncouth, but I assure it was done in good taste, nobody confronted you, but still they called out to you and made sure you parted with some of your hard earned cash.

What got me was how the whole crowd was into it, listening to every detail and following along, as if it was their own brother. And that's how SMR was referred to over and over again, Inzer gitter brider Reb Shoolem Mordche HaLayvi ben Rivkeh. I wish I could sit here and convey my feelings of all the speeches and how much we should appreciate what the "askonim" are doing, but that would just take too long and I may not finish it till next week. So if you were there and have feelings to share please do so here. In short, I sat there from 9 to 1am and was flabbergasted. May G-d bless all that are involved here. They mentioned a Yoeli Shvartz of the "Klal Yisroel Fund" that was instrumental in organizing the event and has worked with our very own R' Pinchus Lipschutz I guess in raising awareness and money in the Satmarer and Chassidishe circles. Over Shabbos the number 100,000 was thrown around alot as the amount raised that evening, and you can believe it.

You can thank the Rebbe zchroinilivrucha for educating his oilam in tzedakah v'chesed for another yid, no matter his affiliation...

Why can't they rais that money for Shalit? Because they don't care because he was fighting to protect haredim and that is not good enough for them?

This is our nations finest hour. Pinny is the hero but Satmar has come thru in groissen. May He see the efforts and bring a yeshua.

Yuk said...
Why can't they rais that money for Shalit? Because they don't care because he was fighting to protect haredim and that is not good enough for them

Yuk,
IMHO, if the charedi oilam thought that $$$ would free shalit, they would have given kiflei kaflayim.
Then again, seichel is an aidele zach.

If Hamas would take money for Shalit, the government would have paid already. If they had issued a ransom demand Satmar would have come through Zionist politics or not.

As a 50 yr old lubavitcher chossid I must make a admission,I think R Shach was right. Now before all my fellow anash go crazy on me let me explain.R Shach and unzere rebbe zy"a had a bittere machloikis,and R Shach always claimed in his iggros that this fight was purely against the meshichism and not against the derech habesh"t.But lets be honest we never believed him (the belzer joining degel nonwithstanding)!But having attended this beautiful heartwarming event here in monsey and having seen the footage of the asifah in Lakewood,and hearing the stirring drasha of R pinchas I now realize that no they dont hate chassidim!Not at all!R shach was speaking the truth!Nur voos this was a machloikis lshem shmayim that we have no place in.And tzig when i realized this I called my children and told them you know something these litvaks dont hate us we are all brothers part of one family.And what a wonderful family it is!

If they really raised 100k, is this a good use of communal resources? Lets not get into whether this fellow is innocent or guilty. But seriously, there are people in all the Haredi neighborhoods who have no food to put on the table or who have a tough time finding employment. Why not use the 100k to benefit them? Why not use it to benefit great organizations like Masbia who help folks who are definitely not even accused of massive fraud? Why not support bikur cholim? How about people who need vocational training?

Anon,
should we throw out Pidyon Sheviem from Toras Moshe,?
the fact has shown that people that give Tzedoka will give and give, and people like you that have theories about Tzedoka ( good or bad)will live forever not giving for nobody.

Yuk
"Why can't they rais that money for Shalit"
I thinking that giving money for Hamas to free Shalit will fuel more funds for the Hamas Killing machine that is rch'l aimed at Jewish cities, Its probably the same problem as with Wiessmandel and the money for the German trucks, he could save some Hungarian Transport but the German killing would continue for a little longer in other regions.

Why can't haredim even think about Shalit or at least say a Mishaberach for him?

Don't know about you, but in my shul we do. Then again, I'm not charedi and most of the shul isn't.

“If they really raised 100k, is this a good use of communal resources? Let’s not get into whether this fellow is innocent or guilty. But seriously, there are people in all the Haredi neighborhoods who have no food to put on the table or who have a tough time finding employment. Why not use the 100k to benefit them? Why not use it to benefit great organizations like Masbia who help folks who are definitely not even accused of massive fraud? Why not support bikur cholim? How about people who need vocational training?”

Good question. But the answer is that SMR was targeted for extermination. Any one who read the daily transcripts of the labor trial (available on Des Moine Iowa Press) was shocked at the weakness of the case. I too used to think ‘where there is smoke there is fire’. Until I started reading those reports!!! It is sadly apparent that RSMR was targeted, either by PETA, the unions, the state etc. So that puts him in a different category. Like Mendel Bellies. That is why Yidden of all stripes, including extreme anti Chabad snags are working on this matter. Don’t you understand the idea that this is in a different category. It is not Pidyun Shvuin of you next door neighbor.

Regarding shalit ...bibi offered to let the rotzhim out to serbia etc...we can't have a 1000 of them in the streets of ramalla...