a Shabbos at the Tziyun/Ohel - Somebody else's this time! 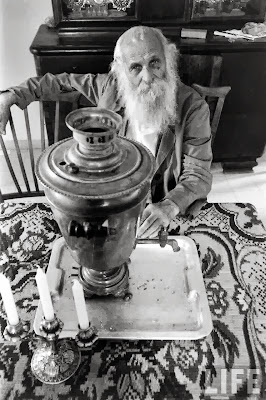 A non-Lubavitcher recounts the Shabbos he spent at the Ohel of the Tziyun of the Lubavitcher Rebbe, zy"a, this past Shabbos Chukas, 5770:

It all started when I happened to bump into Hirshel Tzig this pass Friday. In middle of a harmless and casual conversation he effortlessly and nonchalantly “dropped the bomb”. He asked me if I would like to join him for Shabbos by the Ohel. (The Rebbe's resting place - HT) After I recovered from the shock and mumbled some noncommittal statement, the conversation moved on to other things. When I got home, I did some research about the matzav by the Ohel and called back Hirshel with my acceptance. It was the Shabbos about things that are למעלה מהשכל והדעת that gets ridiculed by those who don’t understand, so I figured I should give it a go. At the very least, it is a change of scenery, relaxing and isn’t worse than a trip to Israel (or to Uman); it happens to be cheaper and the travel is less arduous (despite the traffic on the GW). As expected, getting there two hours before Shabbos – obviously there to stay – I would be rather conspicuous from the outset [I was already donned in my Shabbos finery, tie included, which is a dead give away]. I got the stares from everybody. Stares that were a mixture of curiosity, bemusement and bewilderment, with a heavy lace of skepticism. I most note, for the record, that the Lubavitcher Stare is חלוק בעצם יסוד דינו from the stare of the Snag. The stares I got, were benign and inconspicuous; a far cry from the finger-to-the-nosepiece and in-your-face type of glare that you get in some butey midrahsim in the Ihr Hatorah.

I was waiting desperately for Hirshel to arrive, because I was stranded there in a sea of strangers. I found out soon enough, that the high concentration of Lubavitchers would not be main obstacle over Shabbos. It was the Israelis. 90% of the people there (it felt like 90%) where Sabras first – and Lubavitchers second. I impatiently waited for the elephant seeds to pop out of their pockets; thank G-d they realized that that behavior isn’t appropriate in such a place – talking in your ear while your are davenin S”E or even yapping two feet away from Yankel Katz when he was the Shatz for mussof, (Mr. Snag here confused the ShaTZ with Reb Yankel Katz, the R"Y in Kfar Chabad, who was there for Shabbos due to his eynikel's ufruf. - HT) was deemed acceptable by the Israelis. When the Tzig arrived, being a celebrity of sorts, he was bombarded with questions about the (Circus) Tent. The consummate gentleman, he answered them politely, and then hurried to show me my quarters. You see, I was notified that the connected people get to sleep in comfortable houses down the block, while I had to fish for a cot to drop on the floor of a tent together with a few hundred Israelis. I also discovered, that unlike myself, Hirshel is “connected”, vedal. (This is untrue. I simply called before Shabbos and asked for a bed. I was told that I would get one if there's a cancellation. B"H there was one, so I shared one bed with my 11-year old son, while my 10 year old slept on the floor next to us until I got up. Had the writer called a little in advance maybe he would've gotten a bed too! As it was he took a reserved bed and was not asked to leave! - HT) 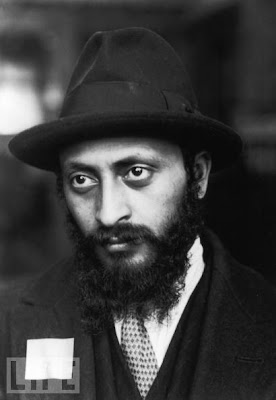 I learned many things over Shabbos – besides for the advantages of Vodka over Woodford (it's a much slower high and is easy on the stomach) and that one can have a large contingent of Lubavitchers without even ONE red beard in the crowd (although there were many with the Lubavitcher trademark beard-growing-from-the-sides). I also learned that cradling a cup of Mashkeh, singing, shmoozing and saying stories that are interspersed with life advice, is not just “chilling” but it is farbrenging. On a serious note, even though it is hard to determine when a farbrengen starts and ends, who is actually part of it and who is just merely looking at others farbreng, there was an aura of seriousness in the air. הלואי our Purims should look like that. It was uplifting and inspiring – to say the least. I also learned that in Chabad, they purposely miss זמן תפילה even though most of the oilam was up at seven. I guess they were making hachunos (people were very serious and most of them were learning Chassidus). It was very surreal and pleasant – the two Israelis learning the Rebbe’s letters bichavrusah were still sleeping. Every single person in the room was eating מזונות and not all of them were sitting. I was expecting a long and farshlepteh davening since they all got their Cheerios, but I was somewhat taken aback by the quick pace of the tefilos – at least they ended up eating three סעודות. [I will leave the gritting fake “ayes” for a different time]. As we are waiting for the עת רצון, Hirshel accosts me with his idea that we should learn something. I head to the seforim shank expecting to see a גלית עלית but instead I find Shapansky’s sefer (בכורי ראובן) and another sefer written by a 17 year old buchor who is an eynekel of the Leshem. While we were learning, the only fellow there who was wearing slippers the entire Shabbos, struck up a friendly and animating conversation with the Tzig. I wanted to ask him if knew the Dinover, but I kept my mouth shut.

Overall, I had many pleasant and enjoyable conversations, even with some of the Israelis as several of them had a certain faynkeit to them. Of course, Chabad has their share of annoying people too – close talkers, those that talk and don’t listen, וכו' וכו' – and the annoying fellow who saw nothing wrong about someone considering being a Rabbi in a Conservadox temple; yet kept on referring to Reb Chaim’s eynekel from Boston as “JB” (he wasn’t the only one to use that moniker). The point being is that Lubavitchers are human beings with families, dayges and all the common foibles – for good and for bad. The one noticeable exception was this one very fine Israeli buchor with a sheyneh gezert, noble and chiseled features. He flashed me a warm smile and beckoned me to approach him. The conversation with him (“L”) and me (“M”) went something like this:

After a brief exchange of pleasantries, he got down to business.

L:Do you learn Chassidus?
M: Of course
L: Tanya?
M: No. Rav Tzodik and שפ''א
L: Chabad is the Pnimiyus.
M: Some have a Mesorah is that it is dangerous to learn about these inyonim; it is only for יחידי סגולה
L: Everybody has to learn Chassidus. The Arizal said it and it is written in שו''ע
M: Where?
L: It says that one has to learn all of Torah and Chassidus is a חלק of Torah
M: I hear.
L:Did you know, that in 1917, everyone tried to leave Russia except for Lubavitchers?
M: I thought Breslovers and Novordikers also stayed.
L:The מסי''נ comes from learning פנימיות התורה – that’s why so many Lubavitchers are moser nefesh to go an shlichus.
M:Some shluchim don't learn chassidus either.
L: I gotta go, I'm tired. (translation: “I give up”) 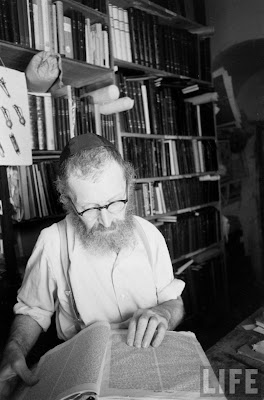 In conclusion, although I hate to admit it, especially considering all that I hear about that cemetery over the years, overall the Shabbos was very uplifting – despite the fact that I wasn’t able to bring myself to go the Ohel. There was an atmosphere of serenity, peacefulness and tranquility. Even I felt the קדושת שבת to a strong degree, and just for that, I would do it again (maybe).
Posted by Hirshel Tzig - הירשל ציג at 11:20 PM

you went to oleh regel but didnt go to the mikdash????? stam ah (deleted)

He (I hope it wasn't a she) probably went to the ohel seven times over Shabbos. Aderaba, making a statement that he didn't go, is the biggest siman that he takeh did go.

Or else he is stam a [deleted]

I am not a Lubavitcher, but I've been to the Ohel maybe 40 times. My great-great-grandfather, a Rav and Mechaber Sefer is buried not too far from there in the chelek of the Monostrizter Rebbe.

I've never taken my shoes off though and I've never tore a kvitel in half. I assume the Rebbe tore them so people wouldn't take them after he left. There must have been some logical reason that doesn't apply to other kvitels.

Not one word of the food situation! Did Mr. Snag trust the kashrut and actualy eat the food? Did he secretly look in the kitchen for a Mashgiach?

"I impatiently waited for the elephant seeds to pop out of their pockets; thank G-d they realized that that behavior isn’t appropriate in such a place."

It could more likely be that they keep to the Alter Rebbe's psak not to eat semitchkes and such on Shabbos.

No read beards? You must have seen a Shemtov or two (possibly even a Hecht . . . Not sure about any Liberows though)

tzig i am a drop bothered by the fact that there is a asifa every night in another town for rubashkin and crown heights has had nothing recently. monsey had already so did brooklyn. whats going on????

anon.
crown heights had a rubashkin asifa 3 weeks ago

"tzig i am a drop bothered by the fact that there is a asifa every night in another town for rubashkin and crown heights has had nothing recently. monsey had already so did brooklyn. whats going on????"

Though C.H had some kind of asifa, one of the main reasons for the asifas is raising funds for the appeal etc.
C.Heights is not the best place for that

It's interesting to note that the panim brought to the ohel are burnt as well . . .

Munkatch
its like going to the ruv with a shaila on a .... and the rav destroys it. After the pesak you consider it done.

Katsker,
the original snags never had a problem with Kashrus, it was a chassidic symptom. Today you have too many snags with alot of time on their hand so they got involved with Kashrus and they started learning Yoreh Dieh, until lately the snag Shulchan Orech stated with the Ketzois in Choshen Mishpat and it ended by the Avnie Miluim in Even Oezer. I read lately that in Chicago, Reb Aron Soloviechig introduced the Issur on Chodush of the Gra, and the Telzer of Cleverland were laughing him off

the original snags never had a problem with Kashrus, it was a chassidic symptom.
I actually heard that the litvishe velt didn't know what tfilin were, it was mainly a cassidishe thing to do, and the litvacks just picked it up from them

they always knew what tefilin was, but not kosher lamhadrin

No. Not Rav Elyasiv himself. He's talking about a bachur, eliyahu Yakobovitch, who's an eynikel of Reb Aryeh Levin and a nephew of Rav Elyashiv. So he's not the Leshem's grandson. The author didn't understand the relation.

Welcome back Not Brik.