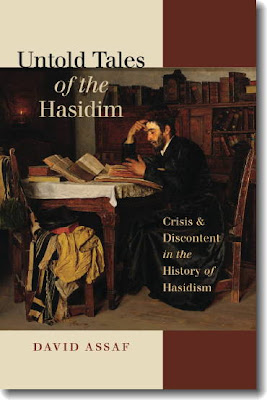 David Assaf's book, now in English for all to see, just when you thought it was gone and forgotten. Actually Tuvia's here in Monsey makes sure to have a fresh supply of that and every other Chasidim or Lubavitch-bashing book at all times, so it's not forgotten by all people. Tuvia is sort of a one-man band when it comes to fighting the perceived enemies of all that he holds dear. I still don't get over the fact that most Lubavitch haters are very excited by the new information they learned about Chabad, yet either ignore or dismiss the other parts - especially if it deals with a sect close to their heart, like Belz, for instance. At least the guys on the outside, like the ex-frummies, buy the whole lot of it. Whatever you say at least they're consistent. The problem I foresee is that in the Hebrew version you need to be somewhat of a learned person to understand and form an opinion - if Hebrew isn't your native tongue, that is - but now anybody can read it, Jews and non-Jews alike, and that can't be good for the Jews.
Posted by Hirshel Tzig - הירשל ציג at 5:38 AM

Why are you bashing Tuvyas?
He brings books that sell.
Please grow up already.
You've already seen that nobody "hates" Lubavitch in Lakewood, something that you are struggling to handle because apparently this is what you were told.
Of course there are major differences and disagreements and Lubavitch sending in underground people to chap impressionable young lads did not help.Still, am yisroel are rachmonim, etc.
Please stop the sly and nasty remarks .

When you post at night, all the bugs that are out come forward.

Tuvia Rotberg is not a hater he likes to have his store in the buzz, he will bring controversial books on any group and field, he is not biased on that part. Something like 5 years ago the Monsey Crazies(for some reason Monsey is blessed with them)protested at his doors for his daring to sell all kind of seforim, I think the Monsey/Visnitzer in his weekly Machoe address Shabbos afternoon also was Moche on Tuvias, he had the protest photo posted on his door for years.

I don't think that it has to be really answered by us frum jews, we always had this kind of detractors, lets face it as the Kotzker vort goes on the acronym of the word Guf, Guf Vil Fressen,Guf Vil Pofen... But the book was answered almost 2 years ago,on Seforim veSofrim where Assaf came on to excuse his pick and choose tactics with lame responses. Assaf is the only academic left in the field of Charidiem/Gedolim that knows his product of research, its amazing the sources that he digs to get to his final product. But his bias will always lead him to the side of sensational smear and tear. He will always believe the maskil vs. the chosid, eventough he will admit that the maskil was full of hate on the chosid and can not be trusted, but the finished product will be slanted completely according to the maskilic version. This is the method he used by the Ruzhiner book and so on..

In the secular world there are books examining and destroying all sorts of myths like those around George Washington or JFK and there was a give and take. Open discusion. Facts are refuted , new facts uncovered things placed in perspective. Why is the Charedi world scared of an open discussion of issues events and personalities, unless there are things to hide.Is ignornace a hallmark of being a Charedi ?
I am not suggesting using this book as a text lets say in the Bobover Cheder, but why should we be scared if a 20 year old working in B&H reads it, whats he going to learn that the Belzer's aidem liked nature or some other facts.As far as R. Moshe goes , so what , is it going to inspire mass shmad ? Is the myth of Chabad beng the greatest going to be affected ? I have read Beth Rebbe etc , so what Reb Moshe acted like a jerk , what does that say about Chabad NOTHING AT ALL.
Sometimes I have the feeling that the Charedi world is less scared of pornogrophy than this sort of book.

go to Tuvias, in the new book section and you will find several Chabad and pro Hasidic books on the bottom two rows.

"I have read Beth Rebbe etc , so what Reb Moshe acted like a jerk , what does that say about Chabad NOTHING AT ALL."

What are you refering to?

hirshel, you've been giving the antisemites fodder for years against the jews. david assaf can't hold a candle to you when it comes to spreading loshon horah...

Allow me to explain

Reb Hirschel, I happen to agree with Schneur about this one and believe that you, to a certain extent, are guilty of perpetuating the very exposure you bemoan.

How many people, [no shortage of wanna be oifgeklerte amongst them] would have known nothing of this book had you not made notable mention of it here. It would have very likely slipped completely under their radar and veiter gefurren. Not anymore. Now, much thanks to you, after a quick google search and even quicker amazon purchase it will be in Oholei Toraha's dorm in time for beginning of next years opening Zman this coming Elul.

if this is the worst book or thing they find in OT's dorm iz gantz fein. VeDal

that really is entirely beside the point now, is it. In any case, in a way this can be the worst thing that a serious bochur voss shvimt nisht in dvarim assurim could read. VDAL.

If one reads his book about the Rizhiner, he has a bit in there about the fact his chassidim considered him moshiach; I presume this is well known, as well as the fact some believe he will return (in a gilgul) as moshiach in the future. The moral of the story is, anti-Chabad people should be careful which books/authors they latch on to in their zeal to attack. The Pri Chodosh writes in one place, that the Nekudos HaKesef was led astray in a teirutz by his desire to be masig on the Taz.

I'm reading the chapter on Reb. Moshe, and your hype doesn't live up to the prosaic reality. If it happened today, with our greater awareness and acceptance of mental health issues, it wouldn't be newsworthy bichlal.

What does it have to do with Brandeis?

A nice touch was Berel Levin receiving an honorable mention at the end of that chapter.

I don't get it. If the book is full of lies, expose it. If it tells the truth, so be it.
It's on my bedside currently; I'll read it when I have finished Heilman and Friedman's book (almost done)