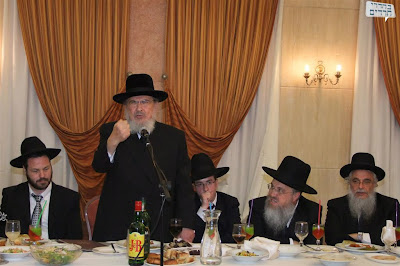 RBM could have been rosh yeshiva in Chevron but there was a distant reiach of machlokes, his shver R Meir Chodosh said 'were outta here'-

The tzaddik, who had been in Slabodka-Chevron his whole life ran like from fire, and together they opened Ateret.

Indeed it is so, R Mayer was yid a tzaddik and his eidem was earmakred for greatness from early on, if not in avoda, certainly in torah.

Interesting is that his shmueesen are noless popular than his shiurim.

Yes, but Ateres never became Chevron. They have the tzups and cool clothes and some of the bren in learning but its not the same.

Ezrachi is a comedian

here is a link to a shiur, many more shiurim available at below address

The Friediker (Rayatz) also had long peyos tucked under his Yarmulka Gerrer style.

Any opinion on this case from vosizneias?http://www.vosizneias.com/61252/2010/08/01/switzerland-court-sides-with-mother-who-kidnapped-child-from-israeli-father-after-he-became-chabad-missionary

If America Is Nisht Andersh why don't the Chabad of today dress chassidish anymore....

Funny how they can wear a tshirt and jeans but if they put a kapote on top then they are fully chassishly dressed....

Why didn't the Rebbe ever tell them to dress more chassidish...?

Please don't give me the line Chabad is not interested in chitoiniyus...look at the way the men and women dress, the cars they drive and the furnisings in their houses......

Was the Rebbe so scared of loosing all his chassidim...I don't think so.....they are and were tied to him with full loyalty...

To make u sleep better,
America iz nisht andersh was not a statement that was proclaimed to insure that every spice and herb that was used in the Goulash in the town of Mishkoltz, has to be preserved with Mesiras Nefesh. or that the hat with the wide triple EEE brim has to be worn by every boy that his last name is Miezels, Yozefofich, Braver .... It meant that Shabos is still Shabos, Kashrus is still Kashrus, and Jews will learn a little Tanya too.

Can I drive a Hybrid car, if my folks drove a big fat guzzler?

Is their in our Dor Yossem a possek that can decipher such heavy weight questions?

Anonymous 7:05pm
Do you call "shloi shini ess malbishom", the same as not changing the recipe of the ghoulash??
Och in vay, you are farchapt.
Nebach

Does a Lubavitcher that grows a beard and wears a yarmulke look like a Goi. ? shini levush definitely does not mean a G&G suit? it means that u look Jewish,
Plz look at reb moshe teshuva regarding changing the european dress code.I am not here to chas vesholem dilute your nostalgic hergeshim, just keep it up with all its nonsense, but don"t argue with someone that does not go for that feeling.

Beards alone are not exclusively Jewish....especially if you follow the psak of the Tzemach Tzedek that a beard is doiraiso....that was the reason for the mesiras nefesh.....

Clearly it does not refer to the beard alone....so your answer is upgeshlogen....

If you are going to say...it is the Baal Tshuvas that go to ball games, have T.V. and eat anything that says kosher hechsher or not...no sorry it is 'gezsha' too.....

Reb Moshe says you can drink cholov akum (which some Chabad mosdos e.g. Melbourne Australia did right up to the early mem's...because it was cheaper....) as well as not dress yiddish anymore....how high does your mechitza need to be ???? Please don't bring R' Moshe's psak out of context....

So can you please come up with a better excuse for not dressing chassidish anymore....

I don't need excuses for anything that is not shulchan oruch, Reb Moshes pesak is holy in Klal Yisroel and by the Rebbe too, eventough some pesokim are not niskabel the same can be said on the Pri Chodesh (and the Chazon Ish)that was Matir Cholov Akum and he is not one iota less possek by klal yisroel.So your denigrating Reb Moshe is not placed well.

Your logic with the Tzemach Tzadk is beyond me, I don't see where it relates to the Issue we are talking,

I see you are a walking Loshen Hora encyclopedia, your photographic mind can spit out in a split second a Rechilas on Chabad down under from the early mems, It is amazing..
Its good you don't know my aunt, you probably saw her once eating Wringleys bubble gum in the late lameds in New Zealand

Where was there disrespect to R' Moshe Tz'l chas vshalom.....the point is that you pick and choose R' Moshe's tshuvas when convenient and not because he was your posek.....

Did anyone in Crown Heights ask if the Rebbe agreed that the way they dress in CH was lechatchila....

I remember when the Rebbe was alive....thirty years ago no self respecting yungerman would dress the way they do today....all went in white shirts and dark pants...no jeans in Crown Heights by anash....are we saying that because the Rebbe is not visible to our eyes we no longer have to follow horaos that don't suit us... ?

the only guidance the rebbe had on mens clothing was, that shabbos you should wear Ziedens,and I remember he saw on a Nittel nite videos of Kfar chabad in Israel someone wearing shorts, he gave a Machoa by the next farbreng,
I dont see where Lifnim Meshuras Hadin is related here,Maybe you can hardly apply Kadash Atzmoch Bemitar Loch, but this can be said on every guy with a long rekel that eats Kliens Ice Cream too.
Again with every posek you pick and choose, even the AR picks and choose, he did not pasken like the Mogen Avrohom 100 % just 90 %

Reb Moshe says you can drink cholov akum (which some Chabad mosdos e.g. Melbourne Australia did right up to the early mem's ...

This is false. R' Chaim Serebryanski ShY" arranged for the distribution of cholov yisroel milk in large buckets to the Chabad moisdos and many families - certainly all the Chabad ones I ate at, and I presume many others. There was a certain amount of mesiras nefesh involved - it was more expensive; it wasn't convenient to store or use; and the milk would be sour by the end of the week. None the less, this is what was done.

Please join us to discuss how we can convince the Agudath Israel of America to bring The Jewish Observer back into print. Even if you don't have any ideas to share, your joining the group is tantamount to signing a petition to see the JO brought back to life!