Lakewood Checks In Loud and Clear! 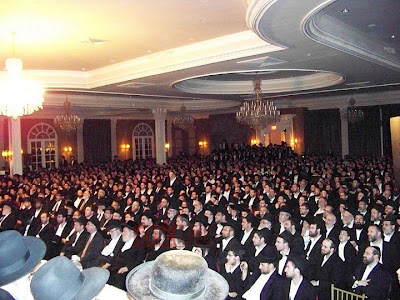 A Letter from a reader:

As a big fan of your site (usually) and someone who was an askan and worked long days and nights for the success of last night's event, I could tell you that although it wasn't a Lubavitch love fest and we still have a lot of work ahead of us in coming together, there was a historical turnout. There was never such a turnout for any event in the history of Lakewood. That includes "The Gedolim from Eretz Yisroel Kabolas Panim" and the BMG tent event that gets pumped and marketed like crazy for months in advance etc. There was local traffic of over half an hour to get to the hall, the roads were like parking lots, many just turned around and went home when they saw they wont get there, others parked their cars and walked 20-30 minutes. The most amazing part was there were lines of simple, poor yungeleit (that don't drive Odysseys and have new homes) giving $100-$180 and the like. We raised over $250,000 in one night of small $ the greatest donation being $1,800. I think it deserves honorable mention at the least. We are really going all out for our Lubavitcher brother.

Thanks,
A Yid In Lakewood 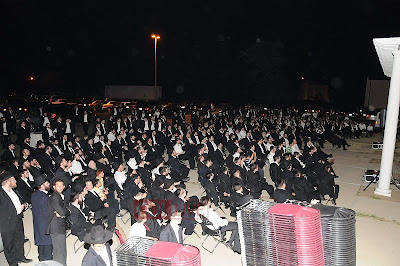 Thank you, a Yid in Lakewood, for your report and your work on behalf of this great Mitzvah. I am pleasantly surprised that despite the fact that the sentence was handed down that people still want to participate in helping the appeal and don't want it to "just go away." What you tell me about the poor of Lakewood writing big checks is wonderful. (That has always been the case - where those that have less give more, but that's beside the point! It's still wonderful to see!) I'm also happy to hear - yes, happy - that Rabbi Waxman from ireinu Monsey mentioned the fact that nobody would but is on lots of peoples' minds: namely why are we helping this Lubavitcher if we soooo oppose what they do and what he believes?! It was a very smart move. People today never speak what's on their minds, and Rabbi Waxman was a breath of fresh air. Where the askonim, P. Lipschutz and all the others have the strength to persevere veist nor der eiberhster, and may he give them alot more where that came from! 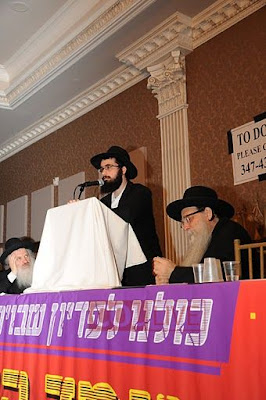 Close associates of Rabbi Kotlar contacted Rabbi Mendy Carlebach asking him to use his ties within the police force to arrange an escort to the house of Shiva.

As a respected chaplain in the police force, Rabbi Carelbach succeeded in fulfilling the request, joining in the entourage to visit the Satmar Rebbe in Kiryas Yoel.

What did Rabbi Waxman speak about?

If I am not mistaking Waxman was in the chaburah of the Great Reb Eliezer Geldzahlers Chabura that learned with Reb Yoel Tanya and farbrenged alot with Reb Avrohom Mayorer. It was a big uproar in Lakewood then, we will leave it for a other day.

What did waxman say re chabad?

What did waxman say re chabad?

After seeing the numbers from lakewood "snags" & the satmar oilem, I wonder what exactly Chabad Leadership has done for R' SMR? To my untrained eye, it looks like Pinny (he was also the guy who got the AG letters) is the main man with some satmar yungerleit doing all the heavy lifting, with Rabbi Hecht always available for media interviews. Why no telethons uch'domeh?

wxman basically said, while it is well known that lakewood and chabad have "Chalukai Daos, they don't have Chalukai Levovos"

How do you know that they guy speaking is a Chabadzker?

What would happen the other way around? Would Chabad make an asifah for a Lakewood yungerman? Isn't there a double standard?

Anon,
"Why no telethons uch'domeh?"
you are a idiot just for asking this question

Why did Waxman find it so important to bring up this "positive" point at all?

Whoever attended was very well aware of the mildly-put Chilukei Deios that has been engrained in the minds of the Bnei Torah all these years.

I find Waxman's comment akin to announcing " I don't believe the rumor that you are a Mamzer."

The issue is not Chabad, it is concerning a private individual that has been mistreated by the federal court system and needs help, period.

If we still can't see past the labeling and stereotyping WHILE we are in midst of engaging in the rescue of another individual, it is a sad sign of childishness in the least and more like an obsession of self-righteousness reflecting negatively upon this gathering.

Aside from this, we should take great pride in the true Ahavas Yisroel demonstrated at this gathering!

2 things. I don't understand why I'm an idiot for asking why the vaunted & heralded fundraising abilities of Chabad aren't put to use when R SMR is in dire need of money for his legal fees. When Ruba D'ruba of the funds for the fund have come from non-chabad sources (this I know to be true from Pinny Lipshitz's mishpacha) its oimer darsheini.

Second, the reason Harav Waxman said what he said was to address the two (wrong) reasons that some people wouldn't give money, namely, it's not Pidyon Shvuyim (he explained why it is) & that the world of Chabad is totally menutak from the oilam in Lakewood (he explained why it makes no nafka mina).

Tzig, please address honestly if you think Chabad would do this for a Lakewood yungerman? Also, why is Chabad getting media coverage and running to the courthouse but not coming thru the way PL has?

it's very easy to point fingers and say that Chabad wouldn't do it for a Lakewood yungerman, but the reality is that this is the first such instance anywhere, ever! So we have nothing to go on.

Its not a question of if Chabad would come through for a Lakewood yungerman, They're not coming through for a choshovo Chabadskeh.

does a Chabad house deny help for a Misnaged?

how much money was raised by the asifa in crown heights for the bochrim in japan?

My dear friend. I was this weekend in a Chabad house in a European city, with a big Misnagdic attendance over Shabbos and the Seuddas, as far as I know no penny was asked and no penny was given till Moonday morning that I visited their.

don't think that because you didn't give , others do the same the shleiach didn't boast about receiving anything for he hoped that you will make it up, its part of the schnurr operation

Anonymous 10:07 PM, a person as sharp as you may end up cutting himself R"L.

The rubashkin who spoke goes by the name "Getzel"! That's the same as Schneur Zal-man?

it is spelled "wachsman" not waxman.

BTW: no Snag uses the phrase "Chabatzker Yungerman". We always say, just "Chabatzker", regardless of age or station in life.

& now we have reached the point where Tzigaleh is not posting any comments critical of Chabad...

Re:why are we helping this Lubavitcher if we soooo oppose what they do and what he believes?!

The answer is poshut: this was selective persecution because of a person being a Jew, and because of his promoting shechita. Even if he was J for J, we would be supporting him for the same reasons.

here is another chabatzker talking in Yeshivas Tal Torah in Lakewood

I never censored any comments here!

I never censored any comments here!

You didn't? So what happened to my comment? And it wasn't even anything too inflamatory.

what happened? go figure it out. Don't accuse me of censoring.

I would ask you for a Brochoh, I just don't think it's - oh, never mind.

I can testify that Tzig, mostly, does not censor , due to my prodding etc.
Actually, he sometimes mines the comments to use .

Burech.
I , visit the blog once in a while, but don't feel like getting into fights, lately

who cares if he does moderate, look what he let's thru!!!

Check out this link:http://www.shturem.net/index.php?section=cols&id=950.
In it a Lubavitcher Chosid requests that "rabbonei Chjabad" rethink their position vis a vis the cherem against Satmar.
I know you won't ever challenge Lubavitchs' so called leadership (actually, unfortunately there is no leadership there, but again you"ll never admit that)but doesn't even a clone like yourself feel bad to go to Satmar and shnorr for various activities, Rubashkin etc, while at the same time keeping to a decades old stupid cherem!!???
Fact 1) is Lubavitch has many gevirim.
Fact 2)Most of the monetary help for Rubashkin comes from Non Lubavitchers.
Fact 3)Most of the MORAL SUPPORT comes from the biggest Lubavitch "enemies" (in your kool-aided eyes at least)

Where is your self respect???
You shnorr from people that you curse out??!!!!
Ad Mosai!!

I don't expect you to answer me now, late at night on such a tough question.
I also want to tell you that I am intimately familiar with Chabad, the good, the bad and the grey areas.This cherem against Satmar has really bothered me.After all Lubavitch champion "ahavas yisroel", how come everything can change, people get over silly fights, but the only thing etched in stone is a dumb cherem???
It's thirty years since you had the fight, get over it!
Ok, I know that you guys are still busy teaching kids about Avigdor, from two hundred years ago, but yeah , that is very uneducational and stupid,frankly.All frum groups have had major fights, and gotten over them and the fact of the matter is that Satmar has no problem with Chabad, it's Chabad who have the elephant memory.

At some point I want you to address this.
Thank you.

I"m not in love with the article, but I chapped hispaalus that at least someone in Chabad is starting to realize that A)Things have changed B)Asking people for money while basheygetzing them is nasty C)As Touger himself realizes, it is politically expedient to be alighned with other Jewish groups.
Hey, is this Eliyahu Tougers son, the guy from the translations?

fights from 200 years ago ...19 kislev i was by farbringen with adin stiensaltz ...about avigdor, putting a gartel on a donkey etc...disgusting...

Very energetic article, I liked that a lot. Will there be a part 2?