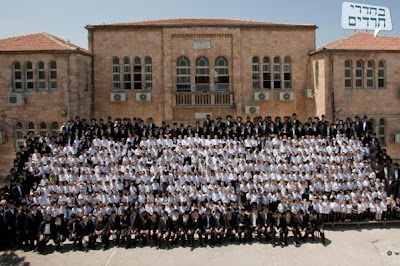 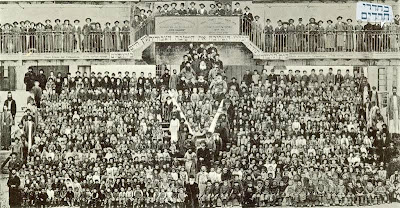 They're turning the whole Rechov Yaffo into one big "Midrachov," with no vehicular traffic allowed. So how are they supposed to bus in hundreds of children if they can't have buses there? So they're packing up and leaving. It doesn't sound like they have a plan for next year, which probably starts around Rosh Chodesh Elul; imagine needing to find a place like that on such short notice! From what I understood from watching the interview with the menahel Reb Nissen Tikotchinski, son of the legendary Reb Michel, zt"l, I see that he has no plans to sell any of the buildings in the huge compound, prime, prime real estate, to say the least. So we wait and see what happens. If you compare the two pictures you might see how the institution actually decreased considerably in size over the 100 years. We can attribute that to the change in the makeup of Yerushalayim bichlal, where no one institution had a monopoly on chinuch as was the case back then. Maybe not complete monopoly, but close to it. Eitz Chaim was THE Litvishe/Perushim institution, where Mesoras HaGro was scrupulously guarded and taught. The Chassidim had - I guess Chayei Olam - and maybe there were one or two smaller Yeshivos for either side - Toras Chaim comes to mind, but Eitz Chaim was THE cheder. Every Yerushalmi worth his salt went to cheder there. It would be the end of an era if EC could not continue.
Posted by Hirshel Tzig - הירשל ציג at 11:36 AM

I hate to says it, but based on the Interview it sounds like the Menahel is not lucid in his thoughts.

today tuition is almost nothing which makes it quite attractive to many...

Correction: They didn't teach the Goan's mesorah, it was just a regular good cheder.

I think the Brisker kids go there, not sure.

[Guess: the Tzig loves Reb Aryeh Levin since he wasn't a "kanoy" - despite the fact that most of his kids became Kanoyim (Rav Elyashiv is the least "kanoyish" in the family)]

Is there a reader who can tell me who attends Etz Chaim today ?With every chug having its own cheder which kids go here ? I have been wondering about this for years.
Toras Chaim was a real yeshiva for older bachurim that I believe taught some lomdus . I think the Weinograd family ran it . It was a place for Serious learning or so I read.

Didn't leiby puretz already buy the compound a couple of years ago?

Eitz Chaim seems to have many of the same Perushim types in the school until today, at least that's what one can assume from the pictures and videos. They also have some of the more "modern" Litvish types, with peyos behind the ears and even "tchoops."

Dov Cohen wrote about his experience with Toras Chaim in his memoirs...

Anon,
the Brisker Kids learn in Torah Veyirah of the NK, Rav AJS is unofficial fundraising for them,
You are correct that until the Silverman movement their was no following of a Gra Mesorah

"Tchoops" is this Yiddish? German? Hungarian?

"Is there a reader who can tell me who attends Etz Chaim today ?"

My nephew attended, and his younger brother will I'YH attend. American Litvish who married Yerusalayim Litvish. All my SIL's brothers attened too. Of course, their Grand Father is a majior macher there, so it isn't 100% typical

who goes? Many baal tshuvos because its cheap and they are rich...owning half of jerusalem...

Does the yeshiva contain a mesivta, B"M or Kollel anymore? If not does anyone know around when these were closed and why?