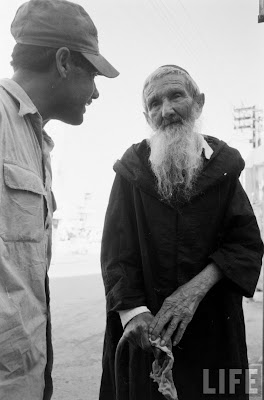 Here's what I got from a respected Lakewood Yungerman and a reader of this blog. Don't worry he doesn't learn full time in BMG, and he works via computer. I'm not sure where his kids go to school/cheder and what he signed and promised as far as Internet is concerned.

Tzig: by the way on the issue of the Bais Chabad question by Rav Chaim; I believe you made a mistake. the question was not posed by Rav Yitzchok Zilberstein! I saw the live broadcast. The question was about entering a Reform Temple. Rav Chaim and the olam were discussing it, then someone at the table piped up about whether it is permitted to enter a Bais Chabad. Rav Chaim did not respond, and basically ignored the question as did Rav Yitzchok. I was quite curious though who was nuts enough to pose such a question to Maran Rav Chaim, and it was, indeed, Elya Mann. No questions were asked from Lakewood, All questions were asked in Bnei Brak, by Rav Yitzchok Zilbershtein. No one else was asked to chime in. I was told that the part where he asked the question was not cut out intentionally, but that they posted whatever video they got. Mann's status varies depending on who you speak to. In the last day, I spoke to an old Ponovezh talmid who works very closely with Rav Shlomo Kanievsky. He told me that while Eliyahu Mann looks at himself as Rav Chaim's gabbai, that is not quite the way others perceive it. But all were maskim - even those here in Lakewood who are not what you would call pro-Chabad, were livid that someone would pose such an asinine question to our gadol in front of thousands of people. When he asked the question, all the viewers saw was his back, which is why people didn't know who had posed the shailah. Even big Rav Shach guys will tell you that it was the dumbest thing a person could do, especially someone who ostensibly cares about Rav Chaim Kanievski. The other issue, which you touched on on your site, was the slight air of leitzanus that pervaded the broadcast. But the truth is that Rav Yitzchok Z was given the task to make it interesting. And anyone who knows him knows that that is simply his personality. It was not put on. In any case, that's the story. And, for the record, neither Rav Chaim nor Rav Yitzchok seemed amused by the question.

So there you have it, my "adjusting entry."
Posted by Hirshel Tzig - הירשל ציג at 11:03 PM

It is no big surprise that the controversy is started by some mid-level askan with eyes bigger than his brain. Meanwhile, the greste rabbonim like RYZ and RChK do what great leaders have always done when confronted by ignorant gas-baggery; they tolerate, marginalize and ignore it.

Everyone should be happy with this outcome, I think.

It's because of posts like these -- where Tzig gives us a clarification when one is due -- that I keep coming back to this blog. Yesher Koach!

You shouldn`t have posted this until all the cholere`s "adjust" anything they ever said about the Rebbe.

I just saw this shabos in silverstien sefer chashukie chemed a question if someone is bedwetting , if he can sleep in the sukka? his seforim are very amusing, He probably would pasken that you can not learn it in the 9 days

Thank you for your clarification.

Thank Hersel for the clarification! Your so great!
because of your clarity I will never again believe a buba maisa lie, made up about a godol!
Gosh your so great!!!!

u still must ask ryz mechilah

Thank you tzik, I know you didn't do this to make yourself look good...

I'll keep coming back to this emese blog..