Shh... Don't tell Satmar they're being had 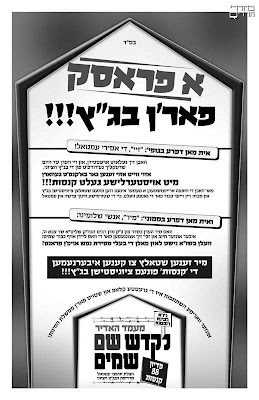 It's amazing what a few dollars will do for you.

For one you'll take 60+ years and send it down the toilet. For 60+ years Chinuch Atzmai and Tziyonishe gelt was good, all of a sudden they've become Kanoyim! The Nesivos Sholom, who they claim to revere and love was the biggest proponent of CA and they're gonna drop it?! Mi Yegaleh Ofor MiEynecho, Baal Nesivos Sholom! They totally dropped the ball here, all for a little pride. Of course the BaGaTZ was wrong for meddling, and they HAD to be resisted, but it never had to come to that, and now they're gonna put their collective feet in their mouths for a few bucks! Satmar and the Edah HaCharedis will demand a guarantee for the money. Mark my words: 5-10 years of a complete Nituk period from the Shilton haTziyoni, otherwise not a penny. And then they'll have to switch back to only Yiddish, even in the Girls Schools. And then they'll create new dress codes. Just like the BaGaTZ meddles they'll "meddle" too. They're not total fools. "You want our money? Let's see you act on it, sweat a little like our chadorim and schools do."

The truth is that I don't blame the Yerushalayimer Slonimer for trying their best, even if it did mean pulling a fast one here. They knew that Satmar is big on Tzedokoh and even bigger on "sticking it to the Tziyonim," so they gave it a shot. Who wouldn't. But I figured that the biznessleit in Satmar would recognize a scam when they see one... I guess the need to stick it to the Tziyonim is greater than we thought it was, even at the expense of gelt and pride. We're talking about collecting money for the Immanuel Parsha back in the summer, when a bunch of fathers went to jail for not listening to BaGaTZ, who was telling them to accept all children, without exception. The Court placed a hefty knas on those fathers and they have no means to pay. So they decided to go to Satmar and see if they'll help them in their favorite cause, and it seems like they ARE helping. Slonim's talking about pulling out completely, not taking any Government money anymore, which is what subjected them to the rules in the first place. We'll see what happens. In the meantime they're working on paying off the knas part, and they're getting the "mesiras nefesh" title attached to them.

The cutest thing is that the money they collect will go straight to the טמא'נע בג"ץ to pay the Knas! They'll take that money and Shmad Yiddishe Kinder with it! Hello there? Is anybody listening?!

soon the whole world will relize that satmar is better address than the medina. go satmar go

Noticed a couple of Satmarer at the Kinnus.
The guy from Beijing, whatever his name is,FreundlichI think, for example was there with his Satmarer "mekurovim"

wow! amazing how your warped mind completely turned this story on into the opposite of what it is! and the world is upside down!

shmulik is teaching them yiddish and growing theyre peyos for quite a while already.... way to go!

The cruelest part is that Slonim still thinks themselves above the law. They built a mechitzah so their precious kinderlech wouldn't have to look at those wretched, subhuman monkeys in the schoolyard. They encouraged their kids to yell the vilest of curses and insults and they expected no repercussions. When called on it by the court (for the flagrant violation of civil rights law it was) they heaped their contempt on the court, with the predictable outcome. Now, suddenly, they are the victims in all of this?

Not one penny. Not a singe one!

what is ironic in this false Satmar war against the Begatz, The old Rebbe the Baal Divrie yoel(for the aroni faction) Veyoel Moshe (for the Zali Lietner Kashau faction)used the Begatz hatzioni when he wanted to grab the Tolchever rov house and shul in Zefat for himself,he called his former nephew to the Begatz hatzioni.The same is happening now, both factions are by the Begatz Hatzioni regarding some property rights in Benai berak, and the herd still buys that crap that we have to slap the Begatz...
who still takes them serious....