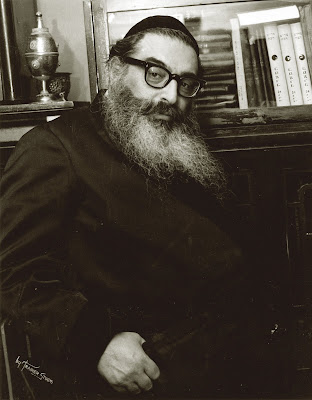 The picture discussed in the Yohrtzeit article.

You must admit: Posing for a picture like this, and maybe even inviting Heshy Trainer to come take his picture, is nothing short of classic. Slabodker "Gadlus Ho'Odom" and a gartel and samete cuffs combined.
Posted by Hirshel Tzig - הירשל ציג at 6:25 PM

This picture was used in one of the magazines

This one SHOULD have been used

can you procure superior quality versions?

Funny you make a big deal about a pic when your rebbe is by far the photographed Jewish leader with his followers giving his pic iconic status,including hanging it up in syngogues.

Those glasses - did he use the same optician as the Ralag.

Funny you make a big deal about a pic when your rebbe is by far the photographed Jewish leader with his followers giving his pic iconic status,including hanging it up in syngogues.


Teyreh Yoni,
you are an original mind.
Your insightful comments are what keeps us coming back to this blog.

Yoni
did Rav Hutner have chasidem that needed hiskashres 24/7 as air to breath?
if yes then I understand his pose.We know that he was obsessed with being a Rebbe,

Poor Tzig....
Reaching desperately and trying ever so hard to be machzir atara l'yoshna.
With Schneur gone, the intelligent comments and exciting discussions on the blog are few and far between.
Nice try with RYH though. Some of the greatest posts this blog has ever seen were regarding CB and RYH.
Sadly, CBT retreated like the coward he is when he was exposed as a liar and a fraud. He would certainly have some worthy insight on the RYH posts....

Other
I disagree, the Tzig survived the vanishing of Schneur well, most posts since then, are of a higher standard,

"did Rav Hutner have chasidem that needed hiskashres 24/7 as air to breath?"

Can you repeat that in English?

{.We know that he was obsessed with being a Rebbe,}

News flash, he was a rebbe!
He was not interested in clones, that's why he did hung around the Yeshiva World where he found the bright and curious minds he loved

fed up in peoria said...

With all their faults,giants roamed this earth. these discussions won't be going on in 30 years from now about today's leaders.

How many other people engaged in a high-level torah dialogue with the Rebbe like Rav Hutner?!!

The letters published by Tzig a while back Re: mivtza tefillin were classic.

Rav Hutners letters{to the Rebbe} are classics.The writing is so creative and flowery.Though,I think the Lubavitcher was right about the issue of kavonah by tefillin, you cannot compare their writing style.The Lubavitchers is dry, matter of fact,R'Hutners is a wonderful read.Maybe he had more time on his hands

or the one where Rav Hutner looks like one of Al Capones boys...

or the one on the boat where they whited out the women...

and see the CBers go berserk.

Looks identical to R' Y. D. Groner z"l at similar times of their lives (except for the hair style)

now those of us who knew him way back when will never forget the picture of rabbi kook that had a place of honor in his study. then he got satmarized and agudacized and not only took down the picture, but removed rabbi kook's commendation from one of his books.that this is petty is the least of it. without rabbi kook's tutelage of him in how to use the ideas and writings of rabbi judah loew of prague y. hutner would have been just another lithuanian yeshiva head casting about for distinctiveness.and of course who can forget his mean spirited circulation of a letter to excommunicate rabbi j.b. soloveichik for encouraging women at stern college to study torah she'be'al peh. this was put down by that venerable righteous and kind leader rabbi m. feinstien. and as if all this were not enough who can forget when he presented his final effort in unconditional ahavat yisrael as he declared, (surely after receiving a prophecy to that effect from the word of the kadosh barukh hu)that the sin of zionism was punished with the destruction of european jewry. all this notwithstanding, i do remember with interest his public lectures, and his essays in pahad yitshak contain some interesting approaches that he learned from rabbi kook.

I agree Issac. I did a double take when I saw this photo. The glasses, beard and gaze are almost identical to Rabbi Groner z"l (not to mention other physical features).

Wasn't YD Groner a respected talmid of his for some years?

Groner studied in Chaim Berlin.
At least in elementary,but,I think he held of himself a bit as a Chaim Berliner.So no surprise that they he may have modeled himself after R'Hutner

Henoch,
their is no question that he was talented, but far from Emes.

Anon @ 6:39:00 PM –
Don’t pretend that you are one of those who knew him “way back when”. You are a poser and you have your facts backward.
You no doubt are referring to the picture of R’ Kook that hung in RYH’s sukka at one point but was later removed.
R’ Kook’s influence on RYH can clearly be seen in the similarities of their writing styles, and although RYH must have learned quite a bit from RK he did not agree with RK’s shittos regarding Zionism - there is nothing wrong with that.

Other
"and although RYH must have learned quite a bit from RK he did not agree with RK’s shittos regarding Zionism "
he has the right to disagree with anyone, the question is when did he disagree? is it because he realized that his kind of people that he wants to be recognized as the Godal are moving in a different direction.For some reason he is being accused for that along all his moves in his "making of a Godal" career.

Rather surprising that everyone here does not realize that this photo comes from the collection of photos from the wedding album of Rav Hutner's daughter, and his only child, Bruria, to Rav Yonoson David.

A copy of the album was on public display at Trainers in Boro Park for a long time, and yours truly even went there once, asked to see it and was allowed all the time in the world to look at all the very remarkable photos in it.

So this photo is not "stam" a photo for "bragging", it's part of larger collection and shows a father who is rightly very proud on the wedding day of his one and only daughter, and that's why he is dressed to the nines and looks so yom tovdig and marvelous.

how many over weight rashei yeshiva have we seen over the years? yh was quite simply a man out of control,a man of immense and unrealized appetites.

I apologize for not welcoming you back earlier.

Nice to hear from you again.

You once entertained us with your erudite comments on a series of pictures...do you think you can pen a treatise here on why the Tiferes Tzion edition of the Medrash Rabbah is not placed sequentially on the shelf, but rather "beis", "aleph" then "gimmel"?